The paratroopers' blue berets and vests are perhaps the most recognizable and beloved elements of the Airborne Forces uniform among the people. At the same time, few people know that “Uncle Vasya's Troops”, as the abbreviation of the Airborne Forces was deciphered under its first commander, General Vasily Margelov, was almost dressed in orange berets and sports jackets. The collector and author of the book “Uniform of the Soviet Airborne Forces. 1931–1991″ Alexey Stepanov.

Alexey Stepanov is the author and co-author of more than 160 articles on the history of the uniform and the traditions of the Soviet, Russian and foreign armed forces, deputy editor-in-chief of the Stariy Zeikhgauz magazine, collector, reserve colonel.

– There were serious disputes about the blue beret. The blue beret had opponents among the military leadership, and the paratroopers wore crimson berets for some time. I managed to find out about this while working with archival documents. In 1967, Andrey Grechko, who had just been appointed to the post of Minister of Defense of the USSR, held a meeting on the uniform. During the meeting, it was decided to dress the paratroopers as marines, with one difference – the uniform of the paratroopers should be of a different color (black berets appeared in the marines in 1963).

A little-known artist at that time Alexander Zhuk (he would later become famous as the creator of several Soviet orders, award badges and the author of books about small arms) painted several figures of paratroopers in crimson and khaki berets. But when his drawings were scanned, I saw that the berets were originally painted … blue. That is, someone was against it, and the color of the berets was changed to protective and crimson.

– At the parades in 1967 and 1968, the paratroopers were in crimson berets. But Vasily Margelov continued to insist on blue.

It was possible to convince the authorities only in 1968, when the issue of uniforms was once again resolved. Vasily Margelov dressed the cadets from the Ryazan School in blue berets and presented them to Andrey Grechko in this form. He looked and said: “Okay, I convinced, I approve.” It is believed that the blue beret was introduced in June 1969 when the order was signed. But the paratroopers began to wear blue berets even before the order, when there was only verbal approval.

– Paratroopers, for example, almost got an orange beret. It was in 1961 – they decided to make a dress uniform and only for Moscow. Then the commander was General Ivan Tutarinov. The set included an orange beret with a white edging, a sports-type jacket with a zipper, sweatpants. The uniform was sewn for the entire ceremonial calculation. But at the last moment, the orange berets were abandoned, and the paratroopers in the parade were in paratrooper helmets. In November, the paratroopers wore this uniform at the parade, but for some reason did not return to this uniform after it.

Jackets and trousers were given to the Sports Club of the Airborne Forces, and paratroopers wore them for quite a long time. In principle, the paratroopers could now wear orange berets, as they say, they were on the verge. 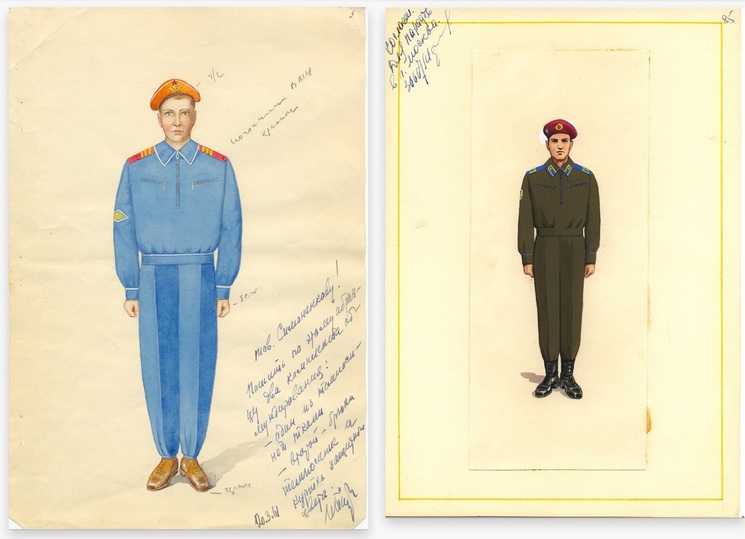 – Failed to reach. There are documents, but there is no answer to the question why. Moreover, the sketches of the dress uniform were drawn by the paratroopers themselves, and they proposed the orange beret. There was a version that in this way they wanted to emphasize the relationship with the GDR – their troops had an orange beret. But the landing of the GDR, the orange beret appeared only in 1964. Most likely, the GDR people spied on and introduced something similar. The documents contain a lot of detailed information, but not a word why they wanted to make the beret orange. And you can't talk to people anymore. How much time has passed.

– The paratroopers have the most violations, which the command not only did not pay attention to, but also encouraged. For example, landing overalls. In principle, there should have been nothing there – no shoulder straps, no buttonholes. It was explained by the fact that when jumping with a parachute, you can catch on to something. Nevertheless, there is a whole section in the book, in which it is clear that the paratroopers sewed shoulder straps, buttonholes, and sleeve insignia on their overalls. There was such a massive violation that the command did not punish, but even supported.

– In the 70th year, a special uniform was introduced – only for parades and only in Moscow. Instead of a shirt and tie, the paratroopers wore a vest. This idea was immediately picked up by other hero cities where parades took place. From the point of view of hygiene, the idea is so-so – the shirt protects the neck from chafing, and the tunic collar from pollution. You can put on a vest once, but it is inconvenient to walk all the time. Vasily Margelov's replacement, Dmitry Sukhorukov, began to initiate that this order be brought back to normal and that the soldiers dress like that. Because the fashion for vests instead of shirts was picked up instantly and worn even under the threat of recovery. In 1988, the paratroopers got their way, and they were allowed to wear a vest instead of a shirt.