World media sum up the Russian President's visit to Tehran, where he met with the leaders of Iran and Turkey. If the Russian and Iranian sides showed “heartfelt agreement”, say the Western media, then Erdogan's plans to invade northern Syria were met with objection at the negotiations. 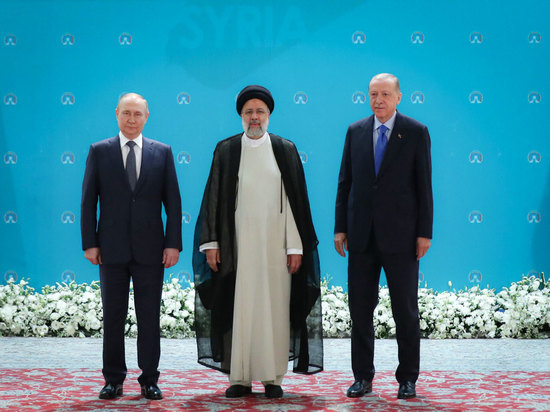 Recounting President Vladimir Putin's trip to Iran, CNN reports that Islamic Republic President Ebrahim Raisi hailed a “significant” the commitment of the two countries to cooperation in the field of security, saying that the two countries have “good experience”; in the fight against terrorism.

Meanwhile, the supreme leader of the Islamic Republic, Ayatollah Khamenei, called the mutual cooperation between Moscow and Tehran “very useful.” “World events show the need for Iran and Russia to expand mutual cooperation,” — the statement said.

Having touched on the conflict in Ukraine, Khamenei also said that the expansion of the North Atlantic Alliance must be “stopped.”

“NATO — dangerous organization. The West is categorically against a strong, independent Russia. If the way is opened for NATO, they will not recognize any restrictions, — Khamenei said. – If they had not been stopped in Ukraine, they would then have unleashed a similar conflict in Crimea.

Russia's relationship with Iran has alarmed Western officials, CNN admits. Recently released US intelligence claims that Tehran is expected to supply Russia with “hundreds” of drones, while White House officials say Iran is preparing to begin training Russians on how to use them.

According to CNN, the Tehran meetings also took place amid deadlocked talks to restart the nuclear deal with Iran, to which the United States, Britain, France, China, Russia and Germany are the original signatories.

US Special Representative for Iran Robert Mulley told CNN on Monday that the likelihood of the 2015 agreement being restored is “decreasing every day.”

Commenting on the problem of grain stuck in the Black Sea ports of Ukraine, The Guardian writes that in an attempt to strike a deal that will allow the Russian navy to lift the blockade of ports such as Odessa, the EU agreed to unfreeze the economic resources belonging to the seven largest Russian creditors until as long as it can be proven that resources are needed to purchase or transport agricultural and food products, including wheat and fertilizers. And under the 1936 Montreux Convention, Turkey, a NATO member, is responsible for maritime traffic entering the Black Sea.

Erdogan has led efforts to broker a deal whereby grain can leave Ukrainian ports if the ships pass independent inspection for the presence of weapons. More than 25 million tons of grain, urgently needed in Africa and the Middle East, is currently stored in elevators, writes The Guardian.

In light of the Tehran talks, CNN recalls that the meeting between the Russian and Turkish presidents in Tehran took place after Erdogan repeated his threat to block Sweden and Finland from joining NATO after conditionally agreeing to give the green light to their bid in June.

“I would like to remind you again that we will freeze the process if they do not take the necessary steps to comply with our conditions,” — Erdogan said on Monday after a meeting of the Turkish Cabinet.

Meanwhile, as The Guardian writes, “the atmosphere of cordial agreement that Russia and Iran showed was not shared by Erdogan when it came to his ambitions to intervene in northern Syria.”

The Turkish president is preparing a new military invasion in northern Syria, trying to build a buffer zone 30 km south of the Turkish-Syrian border. Ankara claims the buffer zone will protect Turkey from attacks by the Syrian Kurds led by the US-backed YPG militias, as well as provide space for the voluntary return of up to 1 million Syrian refugees from Turkey. The return of the refugees would improve Erdogan's current chances for re-election next year.

“This move will definitely harm Syria, Turkey and the region and will not trigger the expected political actions on the part of the Syrians.” , — Khamenei warned.

Iranian President Raisi also urged foreign forces to leave Syria and blamed the “US occupation forces” for the instability. “We believe that only the Syrian people should decide on their internal affairs without interference from other countries,” — he said.