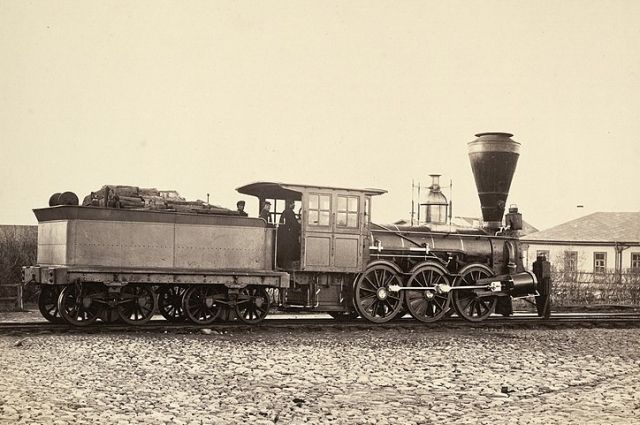 170 years ago, November 13 & nbsp; 1851 & nbsp; year, at & nbsp; 11 & nbsp; hours 15 & nbsp; minutes in the morning from & nbsp; Petersburg to & nbsp; Moscow left the first “ national train '' of six cars of three classes. The official opening of the third railway in the & nbsp; Russian Empire took place. From now on, the path between the two capitals & nbsp; & mdash; old and & nbsp; new & nbsp; & mdash; was calculated no longer & nbsp; days, but & nbsp; hours, which significantly increased the transport connectivity of the country.

This moment was preceded by 15 & nbsp; years of fierce felling between supporters and & nbsp; opponents of the railways. The scale was immense, the problem & nbsp; & mdash; strategic, affecting all spheres of Russian life. The start was given back in & nbsp; 1826 & nbsp; year, when the domestic “ Journal of Manufactories and & nbsp; Trade '' published a detailed analysis of the project of the Austrian engineer Frantisek Gerstner , Czech by & nbsp; origin. He was engaged in the development of options for the construction of the railway between the Vltava and the & nbsp; Danube. By & nbsp; everything turned out that for domestic trade railways would be more promising, and most importantly, cheaper than artificial canals between large river arteries, on & nbsp; which then in & nbsp; Russia were making big bets: & nbsp; is not & nbsp; better & nbsp; would it be & nbsp; with & nbsp; incomparably smaller costs to achieve that & nbsp; same goal by means of cast-iron roads? & raquo; & nbsp;

Domestic bureaucracy, that & nbsp; whatever they say about him & nbsp; skillfully keep his nose in the & nbsp; wind. Ignore such bottom-up initiatives it was impossible. Attention was paid to them. But, according to the age-old tradition, they decided to play it safe. & Nbsp; 8 & nbsp; July 8, 1826, the Department of Railways discussed proposals for & nbsp; construction of railways in & nbsp; Russia. The verdict was as follows: reject all proposals. Reject, because “ such roads are economically unprofitable, and & nbsp; their & nbsp; maintenance in the & nbsp; conditions of our climate, especially in & nbsp; winter time, seems extremely difficult. '' & Nbsp;

The public reared up. From all sides, arguments poured in the & nbsp; benefit of innovation. First of all & nbsp; & mdash; economic arguments. So, the chairman of the Free Economic Society Nikolai Mordvinov assured: “ Of all the routes of communication, railways can be the most useful … A steam engine can pass from & nbsp; 300 to & nbsp; 400 versts in & nbsp; , cargo weights from & nbsp; Yekaterinburg, Astrakhan, Odessa could & nbsp; reach & nbsp; Petersburg in & nbsp; 6-10 & nbsp; days & raquo;. Not & nbsp; stayed on the & nbsp; side even Alexander Pushkin , who was not & nbsp; only the “ sun of Russian poetry '', but & nbsp; and & nbsp; editor-in-chief of the journal Sovremennik, where he raised in & nbsp; including & nbsp; technical issues. By the way, in & nbsp; one of the & nbsp; last letters written on the eve of the fatal duel, Pushkin asked the diplomat, writer and & nbsp; economist Pyotr Kozlovsky to hurry up with & nbsp; sending to the & nbsp; journal of the article “ Brief outline '' of the theory of steam. & nbsp; 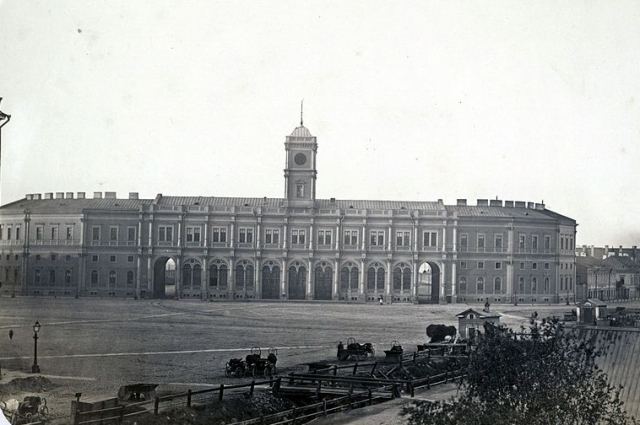 In & nbsp; with regard to the strategy of railway construction, Pushkin rather adhered to the side of Mordvinov, who thought in economic categories and & nbsp; believed that it was necessary to build immediately a network of railways connecting the periphery and & nbsp; centers, and & nbsp; not & nbsp; two capitals among themselves: “ Iron the road from & nbsp; Moscow to & nbsp; Nizhny Novgorod would still be & nbsp; more needed than the road from & nbsp; Moscow to & nbsp; Petersburg, and & nbsp; my opinion was & nbsp; would & nbsp; & mdash; with & nbsp; it and & nbsp; start … & raquo; & nbsp;

In a word, the supporters operated with the concepts of benefit and & nbsp; benefit. Opponents & nbsp; resorted to & nbsp; emotions and & nbsp; intimidation. For example, the chief manager of the routes of communications and & nbsp; public buildings, Count Karl Toll assured: “ The carriage of passengers along & nbsp; these roads is the most democratic institution that could be thought of to gradually bring society into & nbsp; republican forms. '' He was supported by the Minister of Finance Yegor Kankrin : “ The railways will destroy the much-needed social hierarchy, the new mode of transport will lead to & nbsp; equality of estates, since the dignitary and & nbsp; simpleton, master and & nbsp; man will go, sitting next to & nbsp; carriage, in & nbsp; one posad.

Emperor Nicholas & nbsp; I , despite & nbsp; what he considered himself, as now & nbsp; would say, “ techie '', who cares primarily about & nbsp; profit, and & nbsp; often sported the phrase “ we, engineers ''; , turned out to be malleable precisely to & nbsp; emotions. Specifically & nbsp; & mdash; on & nbsp; fear. The idea & nbsp; that technical innovation can undermine the state structure in the & nbsp; perspective has become a reliable obstacle on the & nbsp; track of railway construction. & Nbsp; 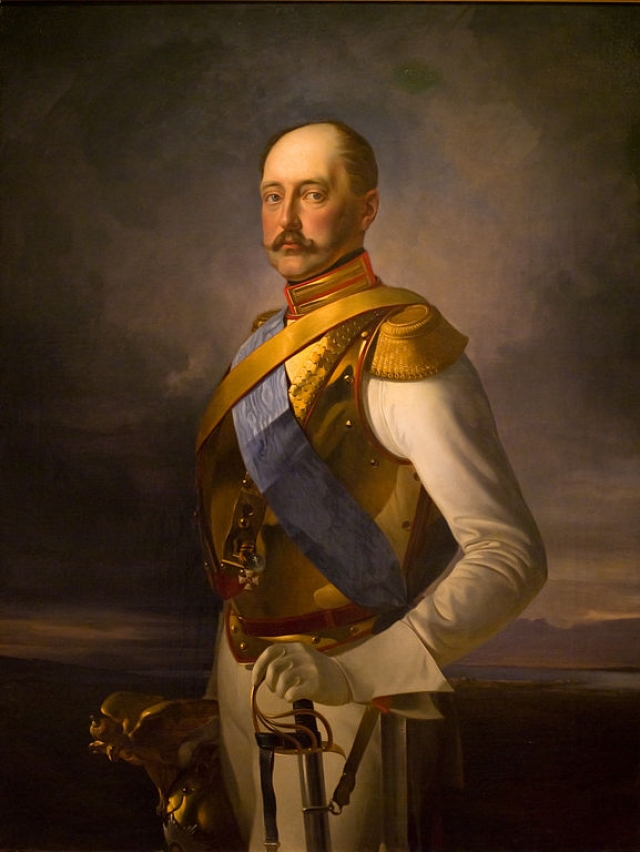 However, every medal has a downside. On the & nbsp; fear of the emperor, the very same engineer Frantisek Gerstner played masterfully, with & nbsp; discussion of the calculations of which and & nbsp; discussion began. He & nbsp; came to & nbsp; Russia with & nbsp; a proposal to build the first railway and & nbsp; achieved a personal meeting with & nbsp; Nicholas I, during which, as & nbsp; would casually remark: “ Your Majesty! I will & nbsp; allow myself to refer to & nbsp; England. The local government in & nbsp; during the riots in & nbsp; Ireland in & nbsp; 2 & nbsp; hours transferred troops by & nbsp; Manchester to & nbsp; Liverpool to follow to & nbsp; Dublin … & raquo; & nbsp; & nbsp;

Nicholas, whose accession to the throne was marked by the uprising of the Decembrists, was most concerned about the strength of power and the suppression of unrest. So the verdict “ There will be railways! '' followed immediately.

Another thing is that the corresponding tasks were set before them. True, the first railway linking St. Petersburg, Tsarskoe Selo and & nbsp; Pavlovsk was rather entertaining and & nbsp; educational and training. And & nbsp; here is the second railway of the empire was laid in the & nbsp; western provinces: & nbsp; Warsaw-Vienna, connecting the Kingdom of Poland and & nbsp; Austro-Hungarian Empire. The idea was kind of & nbsp; and & nbsp; commercial: from & nbsp; from the very beginning it was of great economic importance, since it was used to export coal from the Dombrovsky coal basin to Prussia and & nbsp; products of Polish industry to & nbsp; Central Russia. However, very soon it became clear and & nbsp; its & nbsp; military potential. & Nbsp; 1 & nbsp; September 1 & nbsp; the Russian part of the railway connected with & nbsp; Austrian. The path from & nbsp; Warsaw to & nbsp; Vienna was open. And & nbsp; a few months later, in & nbsp; April 1849 & nbsp; year, the Russian division of General Fyodor Panyutin rolled along it & nbsp; Austrian 'brother' Franz Joseph . & nbsp; 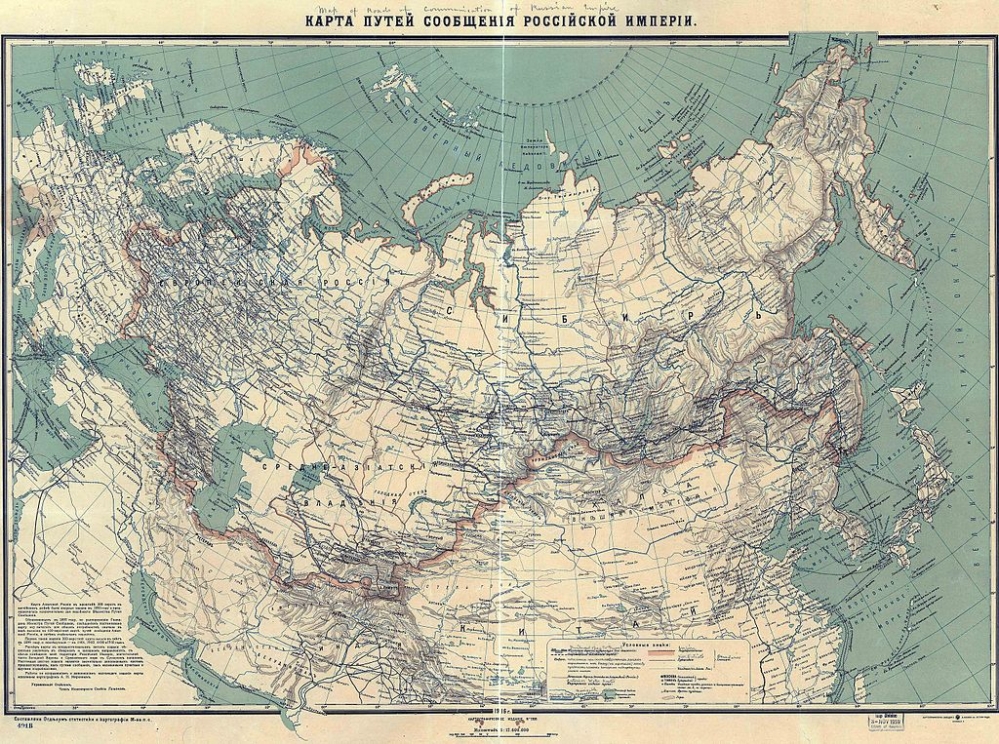 The third railway of the empire, which connected the two capitals, this cup did not pass. The emperor was clearly thinking about the military prospects of a new mode of transport. So, in & nbsp; 1847, he was presented with a note, in & nbsp; of which it was noted that the railway would make it possible to transfer about 60 & nbsp; from & nbsp; Petersburg to & nbsp; Moscow or from & nbsp; Moscow to & nbsp; Petersburg about 60 & nbsp; within 60 & nbsp; hours. people infantry or 6840 & nbsp; people. cavalry with & nbsp; horses. It was the troops who became the first passengers on the railway between St. Petersburg and & nbsp; Moscow. From & nbsp; 14 & nbsp; to & nbsp; 16 & nbsp; August 16, 1851 from the & nbsp; new capital to & nbsp; two battalions of the Preobrazhensky Life Guards and & nbsp; Semyonovsky Regiments, two squadrons of the Life Guards of the Cavalry Guards & nbsp;/p> 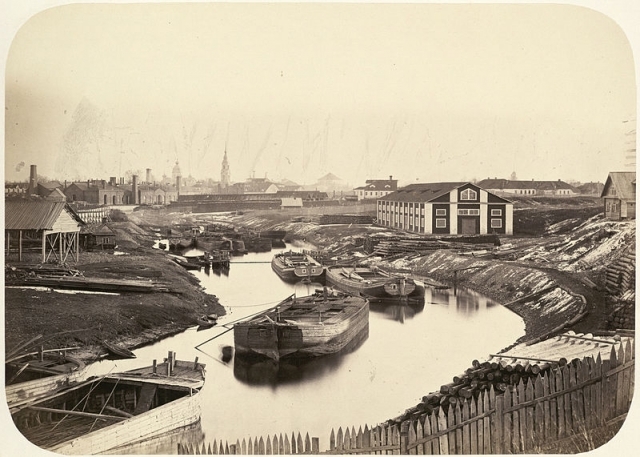 Most of the goods to St. Petersburg at the beginning of the 19th century were delivered on such barges. Photo: Commons.wikimedia.org

But & nbsp; even earlier, on August 6 & nbsp; Nikolai signed a decree, from which the Railway Troops begin their history. personnel became the core of the world's first military railway formations. & nbsp;

When they talk about & nbsp; the opening of the railway between St. Petersburg and & nbsp; often refer to the & nbsp; memoirs of the writer Pavel Annenkov : “ I & nbsp; saw the emperor gloomy and & nbsp; tired: he & nbsp; considered it is your duty to visit under all the bridges and & nbsp; inspect all the embankments and & nbsp; road constructions … & raquo; No wonder. The main customer accepted one of the most important military facilities of its time.