Petraeus on Russian bounties in Afghanistan: 'We were looking for this kind of activity' 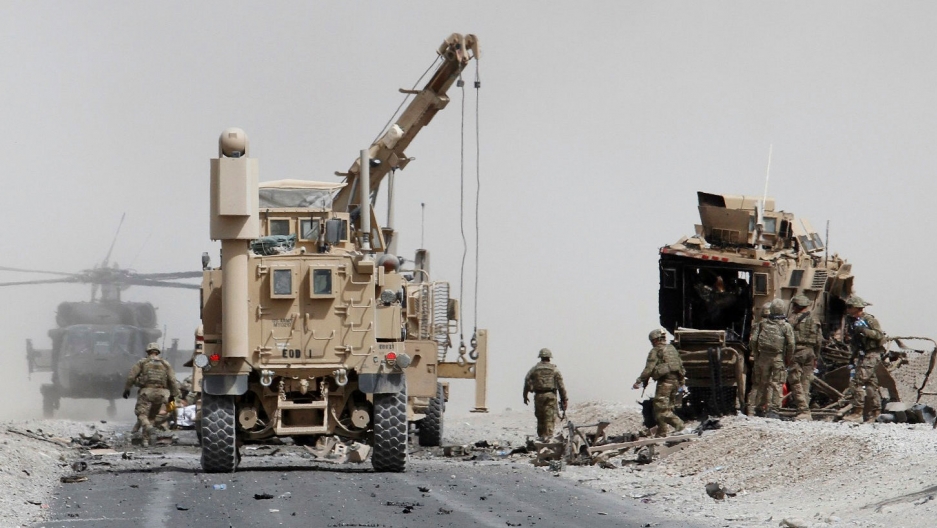 US troops assess the damage to an armored vehicle of NATO-led military coalition after a suicide attack in Kandahar province, Afghanistan, Aug. 2, 2017.

The New York Times reported Friday that a Russian military intelligence unit secretly offered bounties to Taliban-linked fighters to kill American soldiers and other coalition forces in Afghanistan. The report asserts that US President Donald Trump was made aware of the intelligence finding in late March.

Top of The World: Trump denies knowledge of Russian bounties in Afghanistan; pandemic death toll reaches half a million; attack in Karachi

Trump denied that he had been made aware of the situation, saying the US intelligence community told him they didn’t brief him on the allegations because US intelligence agents didn’t find the reports credible. Trump also referred to the story as “Possibly another fabricated Russia Hoax,” and to The New York Times as “fake news.”

The World reached out to Taliban spokesperson Suhail Shaheen, who denied the reports. “I refute this report. It is not true,” Shaheen said. “It is only to create confusion and to derail the peace process.” Russia also denied the allegation; the embassy tweeted that The Times had invented “fake stories” to blame Russians.

David Petraeus, retired US Army general and former CIA chief, says he wasn’t surprised by the reports of Russian bounties for coalition forces.

“We were looking for this kind of activity, frankly, from Russia also, by the way, from Iran and from some other countries in the region, other entities,” Petraeus told The World. “We looked for any support that the Russians might be providing to not just the Taliban, but perhaps some of the other extremist insurgence organizations. But certainly, according to the various news sources that clearly have been briefed on this by folks inside the community, it appears that this certainly took place during 2019.”

Petraeus spoke with The World’s Marco Werman about the report.

Marco Werman: So, based on what you’ve read and heard so far, do you believe the reports of the Russian bounties are true?

Gen. David Petraeus: The level of specificity, the confirmation level of various legitimate, respected news organizations all suggests that this did transpire. There’s quite a bit of detail about the cache of money that was captured in a raid and then followed up with information during interrogations of individuals that were detained during those operations. And indeed, it appears, apparently, that there was at least one American soldier for whom this bounty was paid out. Keep in mind that we are many months after an agreement between the US and Taliban representatives back in February. Since then, reportedly, there have been no Taliban attacks on US positions. So, we’re really looking back at something that took place rather than something that has been taking place recently. That doesn’t mean that it is not absolutely outrageous, unacceptable, reprehensible. And clearly, again, if founded, if the degree of confidence is sufficient, clearly we should have conveyed to the Russians how outrageous and unacceptable this is.

Related: Amb Lute on Afghanistan: The US is ‘taking a very hard look at itself’

Well, it’s a back and forth. Who knows? And, you know, you can parse words and so forth. [It’s] very difficult to know whether this is in the presidential daily briefing or in one of the actual sessions that was held with the National Security Council or with the president.

Typically, Gen. Petraeus, how does this work? If intelligence of this sort is gathered in the field, how does it move up the chain of command? And at what point is it decided that it should reach the president’s ear?

There is a team that’s literally working all the time on what will be in the next presidential daily briefing. They put it together overnight. It is eventually delivered from the CIA headquarters, where it’s still put together, to the office of the director of national intelligence. The assessments are all locked down because this is from the entire community. And you could have signals intelligence, you could have other forms of intelligence, in addition to what it is that the CIA has gathered in the field.

Related: What can the US learn from the conflicts in Syria and Afghanistan?

If this is true and the Russians were offering bounties for the lives of US troops, how will Washington respond to this?

One would hope that perhaps there already had been a response, but if not, then clearly there are various options that can be employed. Everything from a diplomatic outreach to them about how unacceptable this is, how reprehensible. And then on up the ladder, whether it’s clandestine operations, covert action, and not just in Afghanistan, although certainly if this were discovered there, there should be some pretty substantial targeting against those who were engaged in it. But, of course, there are Russian forces operating in southeastern Ukraine. There are forces in Syria, there are proxies in various other places around the world where, if necessary, something further could be pursued.

Related: After a deadly Syrian battle, evidence of Russian losses was obscured

If there was already a response, what would it have been?

Very difficult to speculate. One would think that there would be a denial, but perhaps also some kind of tacit, “Well, this never would have taken place, but, of course, had it taken place, that would be unacceptable. We understand that and it won’t happen again.” There is some speculation that this is a bit of a payback for what you may recall taking place a few years ago in northeastern Syria, where some Russian proxies, essentially the Wagner group — this is a security contract group with some Syrian forces — crossed in a very menacing formation with some very substantial weapons and so forth, armored vehicles, crossed into what was accepted as the Syrian Democratic Forces zone where the US was supporting them. And there were warnings given. When those forces did not turn around, the US hammered them with precision air attacks and so forth. Again, it’s possible that this is some kind of payback for that, except that, again, that was a violation of what was understood to be respective spheres within Syria.

Related: Is the US ready for the rising tide of mercenaries?

Clearly there’s always a desire and a need to know that those above you, if you will, have your back. And that will be among the factors, I’m sure, as this is evaluated further and as additional actions are taken.