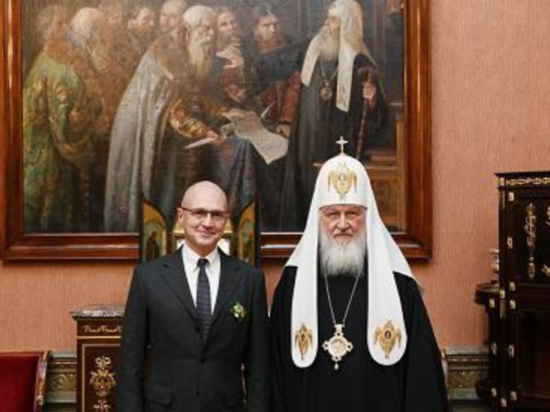 Kirill and Kiriyenko after awarding the latter with the Order of Seraphim of Sarov, III degree, 2020 Photo: patriarchia.ru

Patriarch Kirill congratulated on his 60th on the anniversary of the First Deputy Head of the Presidential Administration of the Russian Federation, Sergei Kiriyenko, noting the success of that “over the years of creative work for the benefit of the Fatherland.”

In a congratulatory message published on the website of the Moscow Patriarchate, the head of the Russian Orthodox Church said that he highly appreciates “good cooperation” AP and the patriarchy, for which Kiriyenko is grateful.

To the hero of the day, Kirill wished the Lord to send him “spiritual and bodily strength”, “good health” and “promote further responsible work.”

Also, the head of the Russian Orthodox Church announced that he had decided to honor Kiriyenko with the Order of Prince Alexander Nevsky (II degree).