Pandemic learning in Mexico requires thinking outside the screen

Millions of schoolchildren across Mexico began the academic year this week in front of a TV. But teachers in Oaxaca say televised classes won’t meet fundamental educational needs and many families lack the technology to keep up, deepening Mexico's socioeconomic divide.

Santi, 6, follows a televised kindergarten lesson in his home as students return to classes but not schools in Mexico City, Monday, Aug. 24, 2020.

Millions of schoolchildren across Mexico began the academic year this week in front of a screen — not with interactive online classes with a teacher, but with prerecorded programs on TV. It’s part of a distance learning effort announced by federal officials earlier this month.

“This isn’t being done in any other country in the world; we’re pioneers,” said Mexico’s president Andrés Manual López Obrador when the deal was announced earlier this month.

When the federal Secretary of Education canceled in-person classes back in mid-March, few imagined the pandemic would still be active by the start of the school year. Education Secretary Esteban Moctezuma Barragán says keeping 40 million students home now “allows the pandemic to be manageable for hospitals.”

But many teachers say televised classes won’t meet fundamental educational needs and large areas of the country lack the technology to keep up with distance learning. They warn that without viable alternatives, Mexico’s socioeconomic discrepancies will widen. 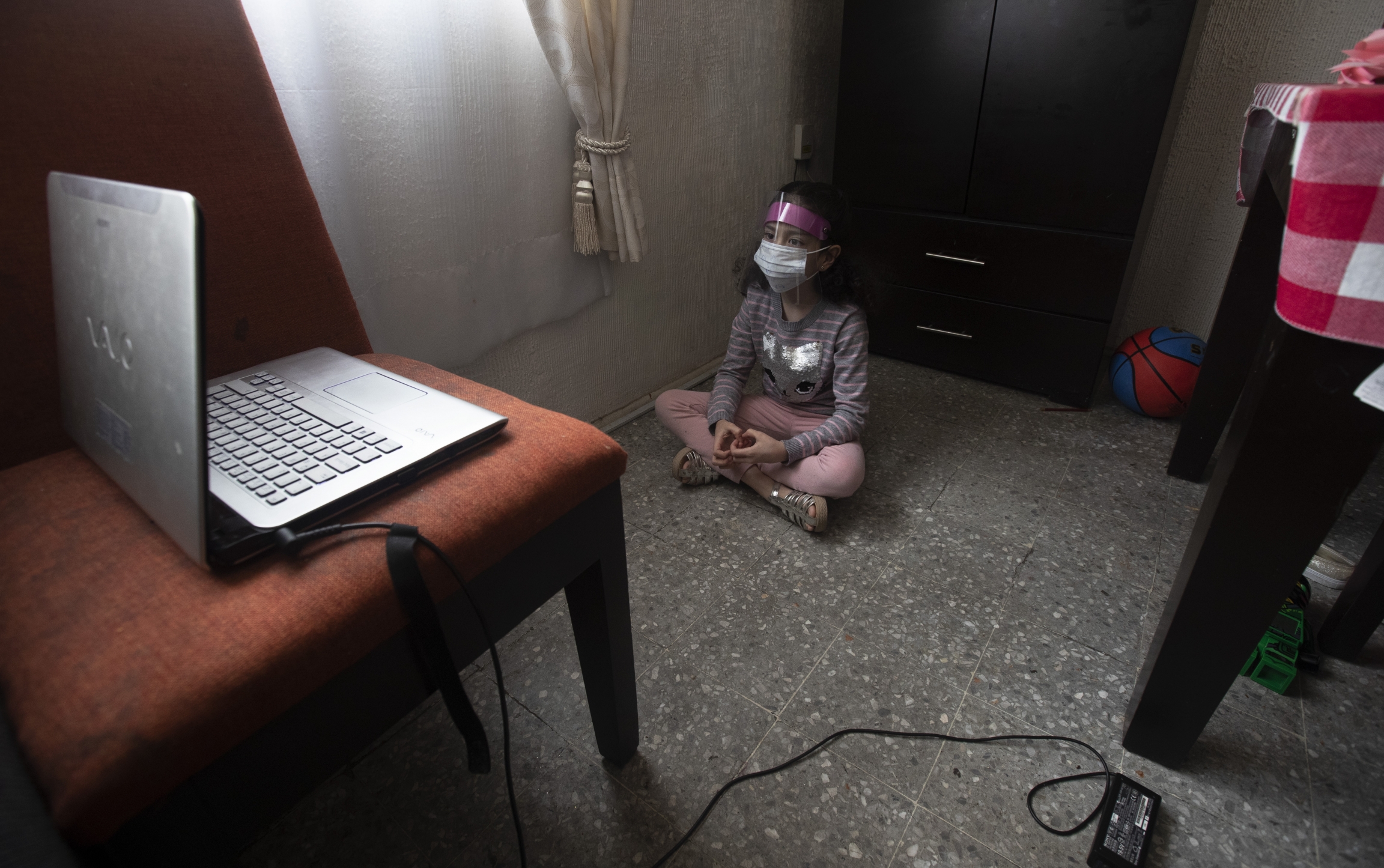 Monserrat Medina Zentella attends school via the internet, amid the new coronavirus pandemic, from her home in Mexico City, Monday, Aug. 24, 2020.

Related: Global education in the age of COVID-19

Secretary Moctezuma Barragán and other officials argue that TV is a more accessible medium than the internet, pointing to studies that show TVs are in 9 out of 10 Mexican homes. Prior to his role as Mexico’s top education official, Moctezuma Barragán worked as an executive for the owner of the country’s second-largest TV network.

TV ownership is lower than the national average in southern states, like Oaxaca. Census data shows nearly 1 in 4 homes in Oaxaca do not have a functional TV set. In the neighboring state of Chiapas, another survey found TV ownership to be even lower. Some families have pawned their electronics since the start of the pandemic. 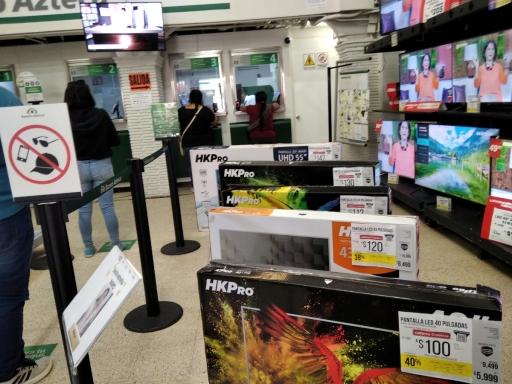 Even in households that do own sets, reception for free channels can be spotty. Many people contract with cable or satellite services to improve reception. Others like Adriana Madrazo, whose son is to begin kindergarten in Oaxaca this year, use their TVs as plug-in monitors for viewing online videos.

Education officials publicized the broadcast schedule for classes on free and paid TV, but were vague on details about on-demand or streaming options. On the first day, Madrazo went to the Education Secretariat’s Facebook page and ended up in the comments section with hundreds of other confused parents. The Education Secretariat is now posting video lessons to a YouTube channel.

Madrazo says information about where to find the online component “has been more through word-of-mouth.”

Her 5-year-old son Zaín is enrolled in kindergarten, but parents at the school are awaiting details on if or how school via TV will factor into the school year.

“In the government press conferences, they’ve been announcing the program itself but not really giving details…We don’t know the substance of the programming, the themes to be covered, how long it’s supposed to last, who is giving the classes, what the evaluation methods are. There’s not really a set program to follow.”

“In the government press conferences, they’ve been announcing the program itself but not really giving details … We don’t know the substance of the programming, the themes to be covered, how long it’s supposed to last, who is giving the classes, what the evaluation methods are. There’s not really a set program to follow,” she said. 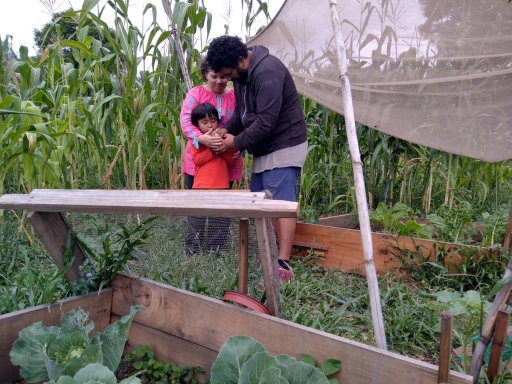 Zaín Méndez Madrazo and his parents in the garden they started during their month of confinement.

During their months of confinement, the family started a garden and began raising turkeys, chickens and ducks. Madrazo says caring for other living beings is what most captures her son’s attention.

Her biggest concern is that Zaín, an only child, has not had regular contact with other kids his age since mid-March. She’s looking to form a small group with like-minded parents.

Thinking outside the ‘box’ in Oaxaca

The uncertainty around schooling has spurred the Oaxaca’s teachers union to dust off an education plan that emerged from a protracted fight against federal education reforms in 2016. The union says their proposal better meets the conditions within Oaxaca than the centralized federal model.

Oaxaca has one of the largest Indigenous populations in Mexico and is home to 16 different languages. One of Oaxaca’s unique school programs uses the bilingual Indigenous education model, which emphasizes dual language learning. Teachers with regional variants of Indigenous languages often handcraft learning materials for their students.

Federal authorities dismissed the Oaxaca teachers’ union plan in 2016, developed after months of strikes and protests to oppose a set of reforms they said would impose a one-size-fits-all model in a state where socioeconomic conditions and connectivity to basic services like electricity and water is significantly lower than in other regions.

But now, the Oaxaca teachers’ union has pushed back the start of the school year to Sept. 7, and will implement an alternative to televised instruction. The logistics remain unclear, but some schools in Oaxaca have begun distributing workbooks and opening communication channels between teachers and parents. 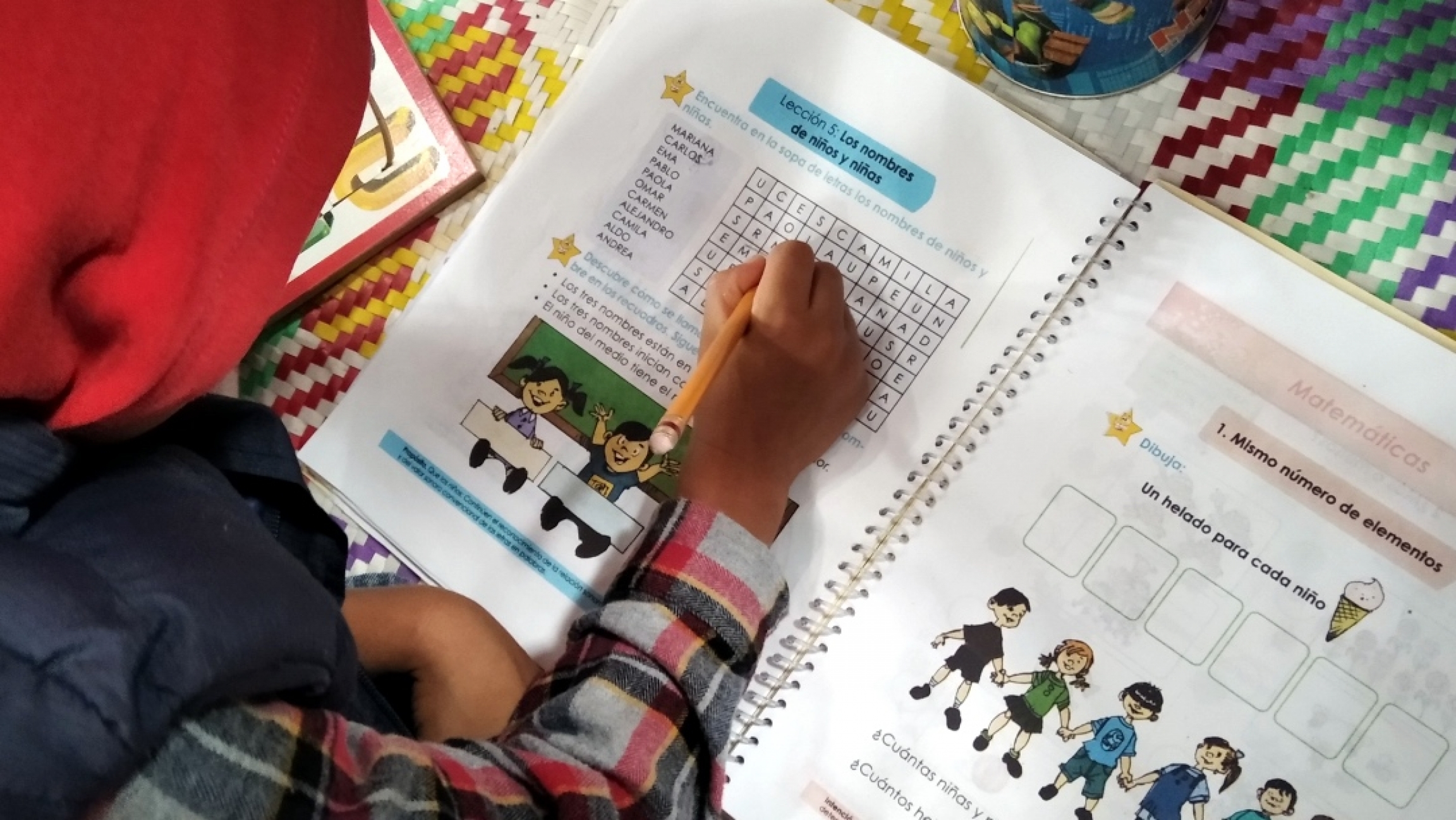 As millions of students in Mexico head back to school with lessons broadcast on TV, some teachers in Oaxaca are bypassing TV school altogether with weekly booklets of worksheets.

“It creates a cultural understanding and a comprehension of the way in which people relate with nature … It’s something profound.”

It’s also something that doesn’t translate easily to televised programming produced in Mexico City. Gutiérrez doesn’t knock the idea of TV school but says it’s just not a viable option for his students. Many don’t own TVs and some don’t have electricity. The mountainous terrain can also block TV, internet and cellphone signals.

“Here in the community, the only real way to teach would require going in-person with the students to the school.”

“Here in the community, the only real way to teach would require going in-person with the students to the school.”

He says teachers will likely meet with parents to develop a plan for moving forward. He suggests staggered classes and take-home booklets of worksheets. But for in-person classes to resume, education and health officials would need to give teachers a green light to open the schools.

And before that can happen, the country needs to get the pandemic under control. Residents of the region where Gutiérrez lives have effectively contained COVID-19 by closing access to outsiders and restricting trips into urban areas.

Gutiérrez says if officials don’t take into account the specific conditions and needs of rural schools and Indigenous students, those children will fall behind. But he’s optimistic that parents and teachers can rise to the occasion.

“There has to be a way,” he said. “It’s just a question of organization and of wanting to make it happen.”

Just how teachers and students in Oaxaca will fare in the “new normal” of pandemic education remains to be seen. For many, TV classes are at least a fallback option that’s better than nothing.

Teachers who fought hard against education reform in 2016 now have a rare chance to make a case that a remote version of their alternative model is better than the federal TV-learning option.

While federal officials control when and how in-person classes can resume, many teachers and parents are looking for ways to maintain a style of teaching that allows for a level of interaction that’s impossible with televised classes.

This search for small-scale workarounds is creating cracks in the uniformity of the federal government’s centralized education model.

What’s clear is that public education during a pandemic in a country with gaping socioeconomic disparities requires outside-the-box thinking, even when that box is shaped like a flatscreen TV.