Information collected from orbiting satellites can tell us a lot about the weather, our changing climate and abundant life on Earth. Thanks to advances in technology, soon we may be able to watch, in real-time, the movements and migration of tiny winged species, including insects.

Russian cosmonaut Sergey Prokopyev lays cable for the installation of the ICARUS animal-tracking experiment, Aug. 15, 2018. The system is being tested in the summer of 2020.

The field of wildlife tracking is getting a major upgrade thanks to a new initiative called ICARUS. It uses special equipment on the International Space Station to allow researchers to track much smaller species than ever before, including tiny migrating birds and even insects.

Autumn-Lynn Harrison, program manager for the Migratory Connectivity Project at Smithsonian Institution, says the ICARUS tags will include a number of different sensors that collect GPS, accelerometer and temperature data.

“You’ll be able to see how an animal is moving in three dimensions through the accelerometry sensors,” Harrison says.

ICARUS is about the size of human thumb and has a small solar panel on the top and a long antenna to communicate with satellites. 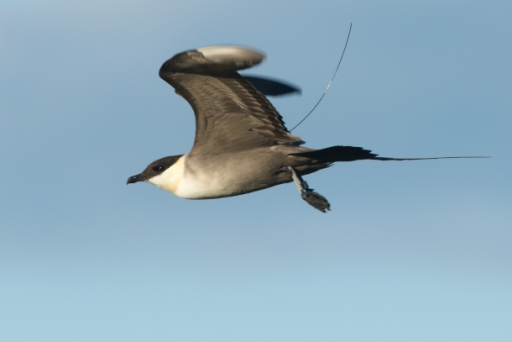 A long-tailed jaeger after release.

The ICARUS tracking device weighs about the same as an American nickel and is about the size of the tip of a human thumb, Harrison says. It has a small solar panel on the top and a long antenna to communicate with satellites. The tag attaches to birds with a small Teflon ribbon, which is formed into something like a human climbing harness. The tag goes over the legs of the bird and sits on the bird’s lower back, so it doesn’t hinder flight.

The ICARUS tags will allow scientists to locate an individual bird with an accuracy of between approximately 33 to 98 feet. The tags Harrison and other scientists use are accurate between 328 feet and 8,202 feet. They are also intended to be a lot less expensive. Harrison’s current tags cost about $3,800 apiece; the ICARUS tags are estimated to cost only $500.

“For the smallest birds, the mysteries to uncover are really infinite — and ICARUS is going to help us do that.”

The ICARUS tags are already quite small and will only get smaller, Harrison says.

“When they are about the size of one gram, the size of maybe a pill of aspirin, this will enable us to track small songbirds [and] large insects,” she says. “We’ve never been able to track these types of small animals with GPS accuracy, in real-time. For these smallest birds, the mysteries to uncover are really infinite and ICARUS is going to help us do that.”

One of the few limitations of ICARUS is that, for now, it will be unable to transmit data in real time from the poles.

“[The Arctic] is one of the most rapidly changing places on the planet. We would like to be able to understand real-time responses to major heat waves, like what is happening right now in Siberia,” Harrison says. “I’m actually tracking a seabird that was just in the hottest region of Siberia and this week left for Canada.”

That real-time information is available with current technology but, north of about 60 degrees latitude, the new technology can’t provide data in real time. The ICARUS data will upload after the tag and the animal have both left the Arctic.

“The hope is that more ICARUS modules will be deployed on other satellites in the future to help cover the polar orbits and allow us to get some of the same benefits from ICARUS for Arctic and Antarctic species,” Harrison says.

“When [populations] start declining, we need to know where they go and when they go there so that we can leverage all of the resources of every country that might be able to benefit that species.”

Some of the animals Harrison and other scientists study travel through as many as 30 different countries in the course of a year. She says she and her colleagues have “long wanted to protect animals throughout their ranges.”

“When they start declining, we need to know where they go and when they go there so that we can leverage all of the resources of every country that might be able to benefit that species,” she says.

Climate change is also causing animals to choose new places to migrate to and from, so scientists want to know which habitats are most important to protect for different species.

“Ranges are shifting,” she says. “We’re already seeing examples of animals moving into places that we didn’t previously have records. … [S]ome of the data I’m collecting are the very first migratory pathways of these species — the very first time we have known where and when these species are. So our baseline information is actually being collected only now, which means that we may not even know how things have changed over the past 10 years, which was an area of rapid change in the Arctic.”

Related: As the climate changes, migratory birds are losing their way

Scientists are working on a smartphone app to go along with the ICARUS technology so people can track their own favorite animals at home. A similar app, called Movebank, is already available for the current technology.

“I like to think of migratory birds as pen pals that we exchange across international borders.”

“I like to think of migratory birds as pen pals that we exchange across international borders,” Harrison says. “We send them to you one season and then you send them back to us. They are a shared heritage of many different communities and countries, and I think being able to visualize that in real-time will just drive that inspiration and passion even more to conserve migratory animals.”

This article is based on an interview by Bobby Bascomb that aired on Living on Earth from PRX.