Welcome or no unauthorized entry

The campfires of refugees trying to break into the European Union have been burning for days on the Belarusian-Polish border. “This smoke from hundreds of bonfires is already visible even from space,” commentators on federal TV channels are indignant. “The nights are colder and colder, and even warm clothes cannot save you from the frost … But the doors of Poland are tightly closed.” The angry denunciations of the heartlessness of Europeans exuded by the TV screen lack one, but very important detail: an example of correct, humane treatment of refugees, shown by Russia itself. 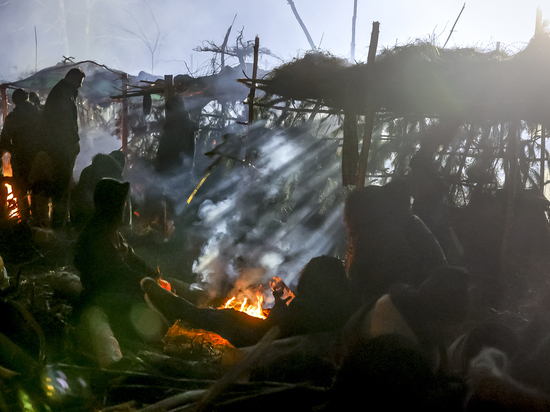 Well, to have something to compare with. What is “bad”, we have already understood: this is when the Polish border guards do not allow thousands of crowds of illegal migrants to cross the border – despite all the peacefulness actively demonstrated by the unfortunate wanderers. People of the kindest soul: they go to storm the border barriers with stones, sticks, shovels and wire cutters in their hands. Although they could have used a razor … I mean, use a weapon.

Today Belarusian television is energetically hinting at this: they say, the average refugee from the Middle East “does not know how to use a mobile phone very well, but from the age of five he has been using a Kalashnikov assault rifle”. Why telepropaganda – the president of the republic himself talks about attempts to “transfer weapons, ammunition and explosives to these people in the camp”! , do not shoot or blow up!), not providing them with shelter and benefits means, as the official representative of the Russian Foreign Ministry put it, “to trample all human rights doctrines taken together.”

All the more surprising is the news that came the other day from the opposite end of the Union State. “Nine Afghan citizens have been detained who illegally crossed the Russian border from the West Kazakhstan region,” the Kazakh version of the Sputnik news agency reported.

– According to preliminary data, the Afghans were detained by the Russian security forces. Information on illegal border crossing by Afghan citizens was confirmed by the National Security Committee of Kazakhstan. Pre-trial investigation under part 2 of article 394 of the Criminal Code of Kazakhstan “Organization of illegal migration” … illegal immigrants will not stay: they will be handed over to the competent Kazakh authorities. This is the order provided by the readmission agreement concluded between Russia and Kazakhstan. And, as follows from the report “Russia as a country of asylum” of the “Civic Assistance” committee (an NGO specializing in helping refugees, is recognized as a foreign agent in the Russian Federation), such a “warm” meeting on the Russian border is not an exception, but a rule.

“In practice, events usually develop according to one of the following scenarios,” the report says. – Scenario 1: “Roll where you came from.” If a refugee arrives by plane, he is not allowed into the country, he is detained in the transit zone of the airport and sent on the next flight to where he came from … Scenario 2: “Come on, brother!” The refugee is detained and prosecuted for illegal border crossing (Article 322 of the Criminal Code of the Russian Federation), placed in a pre-trial detention center, where he spends several months before the trial … The court usually imposes a sentence of imprisonment for a period not exceeding the time actually spent a violator in a pre-trial detention center … After spending several months behind bars, refugees, as a rule, no longer seek asylum in the Russian Federation and prefer to fly to some other country (if possible) or even return to their homeland. ”

Over the past five years, from 2016 to 2020, only 153 people received refugee status in Russia, most of whom – 94 – were citizens of Ukraine. As of the end of last year, there were only 6 (six!) Officially recognized refugees from Iraq and 2 (two!) From Syria in Russia.

This, according to our TV propaganda, shedding tears over the bitter fate of migrants burning bonfires on the border of Belarus and Poland, they are fleeing from blazing Russian migration officials who deny asylum to refugees from the Middle East, everything is fine and calm in these countries.

As the motivation for the refusal to the Syrians, officials of the migration service “often write that there are allegedly” grounds to conclude that the situation in the Syrian Arab Republic has stabilized. ” For example, the decision of the migration service dated January 25, 2018 indicates that about 100 percent of the territory of the SAR is under the control of government forces. In large settlements, order is controlled by units of the military police of the armed forces of the Russian Federation.

To justify the officials, it should be said that they stop migrants, guided by state interests, which in no way include the flooding of the country by people from a completely different, alien cultural environment. Yes, these interests do not quite coincide with humanistic ideals. But a stone in callous bureaucrats can only be thrown by someone who is willing to place in his house people who “have been using Kalashnikov assault rifles since the age of five.”