Three years after Joe Biden vowed to make Saudi Arabia a “rogue state” over the assassination of prominent dissident Jamal Khashoggi, the President The US has greeted Crown Prince Mohammed bin Salman with a fist as his administration tries to reset relations and stabilize global oil markets. 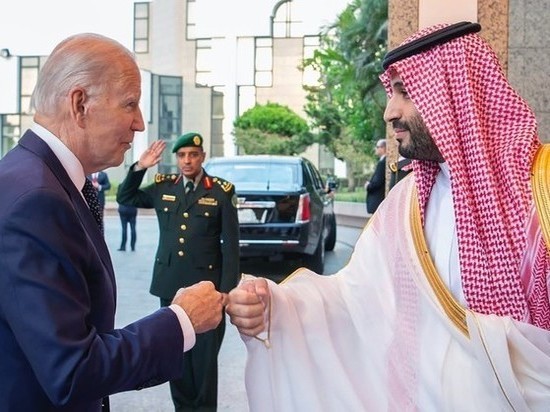 While Donald Trump was personally greeted in the conservative Gulf kingdom by King Salman during his first presidential visit, Joe Biden was greeted on the runway Friday night by the governor of Mecca and the Saudi ambassador to the United States in what The Guardian writes was a subdued ceremony. Then the American president went to the al-Salam city palace, where, before a working meeting, he held talks with the 86-year-old king and his powerful heir, Prince Mohammed bin Salman.

Oil, human rights, Iran, Israel and the war in Yemen are all on the agenda for what is likely to be a bumpy 24-hour journey. Saudi Arabia has been a key strategic ally of the US for decades, selling oil and buying weapons, but as he ran for president, Biden vowed to turn the kingdom into a “global pariah” following the assassination of dissident journalist Jamal Khashoggi in 2018.

After Biden assumed the presidency in early 2021, his administration released US intelligence data showing that Prince Mohammed bin Salman (MBS) approved the operation against Khashoggi, who began writing articles for the Washington Post critical of the Saudi crown prince's sweeping domestic reforms. .

Since then, Biden has made it a point to speak directly only to the king of Saudi Arabia and not to the crown prince, but was forced to reconsider US relations with the world's largest oil producer after the outbreak of the conflict in Ukraine, which contributed to a rise in prices to a 14-year high of $139.13 a barrel of Brent oil earlier this year.

Washington wants Saudi Arabia and the United Arab Emirates, which own most of the spare capacity of the Organization of the Petroleum Exporting Countries (OPEC), to pump more oil to lower the cost of gasoline. The worst US inflationary crisis in four decades looms over the US midterm elections in November, hurting the Democratic Party's prospects.

The choreography of Biden's visit is being closely watched for a genuine détente with Prince Mohammed. Before Biden's trip, the White House said that due to COVID fears, the head of state would choose to exchange fists over handshakes and avoid other physical contact, widely interpreted as a way to avoid photographing the American president shaking hands with the crown prince.

Fred Ryan, the publisher of the Washington Post for whom Khashoggi wrote, called the punching “embarrassing” because it “projected the level of intimacy and comfort that affords [the prince] the unreasonable redemption he desperately sought.”

Hatice Chengiz, the fiancée of the murdered Khashoggi, wrote on social media: “Is this the responsibility you promised for the murder of [Khashoggi]? You have the blood of the next MBS victim on your hands.”

At a brief meeting with reporters in Riyadh, Biden was asked, “What do you say to Mrs. Khashoggi?”

On Saturday, Biden will attend the Gulf Cooperation Council summit, which will be joined by representatives from Iraq, Egypt and Jordan, as well as will hold bilateral meetings with the leaders of the UAE, Iraq and Egypt before returning to Washington.

But despite the efforts of the Biden team, US officials informed that no major announcements about increasing global oil supplies would be made during the trip.

Biden's national security adviser Jake Sullivan told reporters aboard Air Force One shortly before landing in Jeddah: “I don't think you should expect a special bilateral announcement here because we believe that any further action taken to ensure sufficient energy to protect the health of the global economy will be decided in the context of OPEC+.” The oil-producing countries' summit is scheduled to take place on August 3.

The president's four-day tour of the Middle East, which also included stops in Israel and the Occupied Palestinian Territories, also aims to show that Washington remains committed to the security of its allies in the region in the face of a growing military threat from Iran, against the background of the competing influence of Russia and China, The Guardian notes.

In recent years, Israel has drawn closer to the Arab countries against the backdrop of a confrontation with their common enemies in Tehran: the UAE, Bahrain, Morocco and Sudan have agreed to normalize relations with the Jewish state despite the continued occupation of Palestinian territories.

Saudi Arabia, the geopolitical pivot of the Sunni Muslim world, has so far refrained from formalizing relations with Israel until the conflict with the Palestinians is resolved, writes The Guardian. However, early Friday morning, ahead of Biden's visit, the kingdom announced it was opening its airspace to “all air carriers,” signaling the lifting of Israel's ban on Israeli flights over its territory.

Another proposed deal is believed to be confirms Israel's approval of a long-standing plan to transfer Egyptian control of two strategic islands in the Red Sea back to Riyadh. During his time in Jeddah, Biden is expected to lobby for Israel's full integration into an emerging regional defense alliance against Iran's growing drone and missile capabilities.