245 years ago, June 4, 1777, in Moscow, in the lane between the Arbat and Prechistenka, with one artillery major — not rich, but erecting his kind to XVI c. — a son appeared. He, too, will be destined to become an artilleryman.

Yes such that Alexandre Dumas himself will honor him: “Since since the Borodino guns informed France of his name, surprise and  “respect for” him will never leave me. The name is heard of until  — Alexey Ermolov.

But for us, in contrast to the author of The Three Musketeers, Yermolov is connected not with the battle of Borodino, but with the Caucasus. And & nbsp; this connection is painted in & nbsp; rather formidable tones. So, modern Caucasian historians and publicists call him the “royal satrap”, “robber”, who, they say, “pacified” Caucasus to the state of a bloody desert. Some Russian publicists also agree with them, however, they do not condemn the general, but are proud of the fact that the name of "the formidable Yarmul" Caucasian mothers once frightened children. In a word, Yermolov's figure boils down to  one of his quotes:  Better from Terek to Sunzha I will leave the scorched empty steppes, rather than in the rear of Russian fortifications I will suffer robberies and robberies. Choose any — obedience or terrible extermination. With the only difference is that some evaluate this formula with a minus sign, while others — with plus sign. 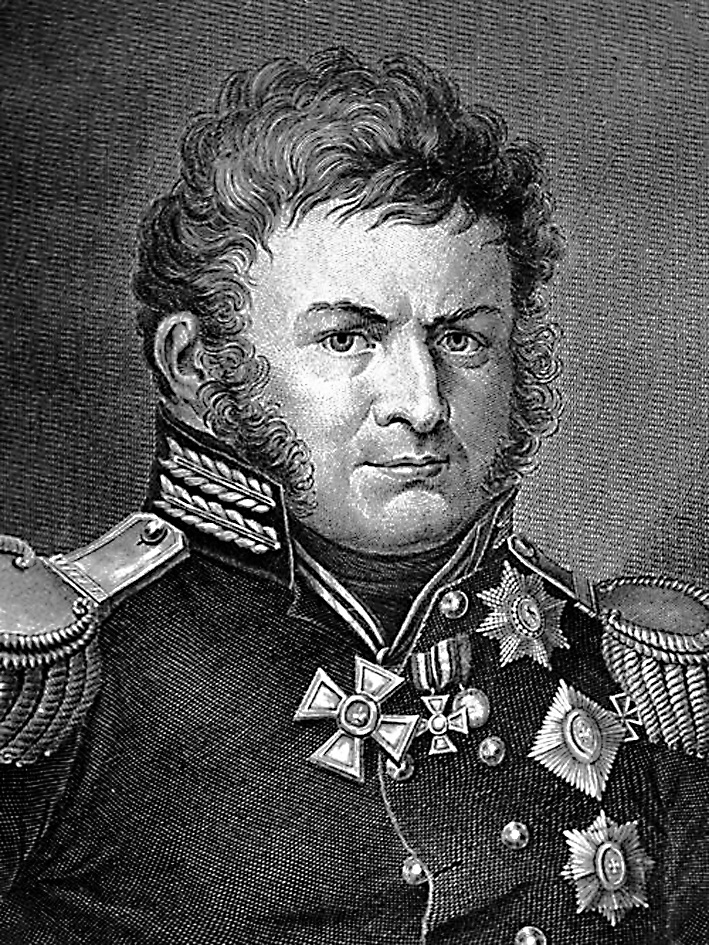 Meanwhile, it would not bad to remember that Ermolov came to the Caucasus already in strength and glory. And his strength and glory is rooted in the era of Catherine the Great, when a very young artillery officer began his service under the command of Alexander Suvorov. His baptism of fire was the command in & nbsp; 1794 & nbsp; battery during the storming of Prague — fortified suburbs of Warsaw. According to its results, Yermolov was awarded the Order of St. George IV degree.

That operation in Europe is usually called the “Prague Massacre”, and Suvorov and his officers are depicted as monsters and cannibals. Although the Russians did not show much cruelty then — out of 30 thousand Poles defending Prague surrendered and were released to the homes of 26 729 people. And there are 3271 people killed. So on "massacre" it doesn't pull at all. Moreover, before the assault, Suvorov gave the strictest order in relation to behavior with the enemy: “Whoever puts down a gun, the liberty.”

This style was absorbed by young Yermolov from a teacher. Here are the words of Suvorov before the assault on Izmail in 1790: “I arrived here with the army. Twenty-four hours of contemplation — will. First Shots — captivity. Storm — death". And this is the ultimatum that was put forward to the authorities and the inhabitants of Paris in March 1814. after the warning volleys of Yermolov’s batteries had died down: “If you don’t immediately surrender, then you won’t recognize the place where your capital stood.” The ultimatum was put forward by Emperor Alexander I, but authorship, most likely, belongs to Alexei Petrovich — it was he who was instructed by the tsar to write a manifesto on the capture of Paris and a manifesto on the end of the war. If you look at it, it's all the same formula as in the dialogue with highlanders: “Submission or terrible extermination.” In essence, Yermolov only brought the highest European standards of his time to the Caucasus. And not so much the standards of waging war as the standards of enforcing peace. 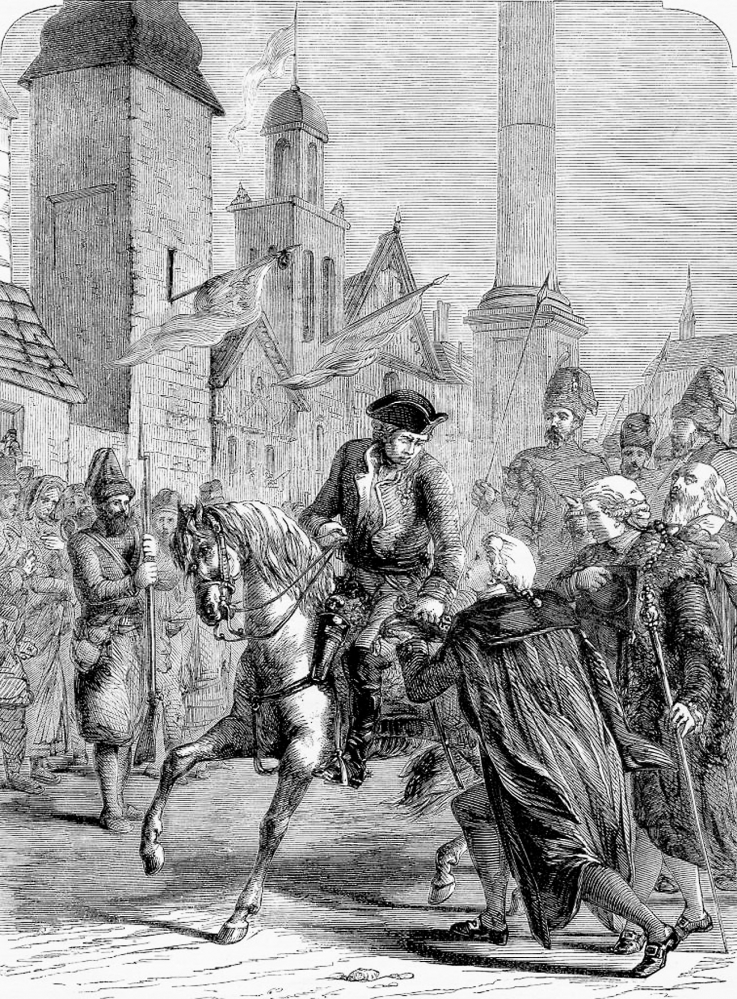 The troops of General Suvorov are in capitulated Warsaw. Engraving from 1878. Photo: Commons.wikimedia.org

This is very important for understanding Yermolov's role in the Caucasus. He was sent there not to start a colonial war, but to establish peace. Unlike the British, who acted in India as colonizers and conquerors, who did consider local residents as full-fledged people, Yermolov considered all Caucasian peoples not just equals, but and citizens of the empire. With all ensuing consequences in the form of rights and duties. After all, following the results of two successful wars — with Persia in 1804–1813  and   Turkey in 1806–1812  — Russia, in addition to Georgia, Abkhazia and Ossetia, already included in the empire, also acquired the khanates of Karabakh, Gandzha, Sheki, Derbent, Cuban… And now these territories were established imperial orders.

True, at first only on paper. In really — who cares about the tsar's manifesto of 1804 on banning the slave trade in the Caucasus? For a long time it seemed that nobody cared about him. But here in 1816 g. “Proconsul of the Caucasus” Yermolov is appointed. A few years later, Alexander Griboedov leaves a note in the travel notes: “Dadaniurt, Andreevskaya, surrounded by forest. There, at the bazaar, Yermolov used to be taken out for sale of captured people — now the sellers themselves are hanged…»

Yes, they hang. Because capturing people and trading them — illegal. Those who do not want to understand this in a good way will have to be led to obedience. But the latter does not at all mean continuous punitive campaigns and scorched-earth tactics. In the end, the word “conquer” has many meanings. For for example, “he conquered us with his charm.”

By the way, Yermolov used this resource often: “He” was not afraid to go beyond the outposts alone, accompanied by only one guide, a very experienced local native in his business, because he was confident in himself and in & nbsp; The fact that the highlanders respect him. On the other hand, the general is convinced that if he changes his course of action, he will immediately lose authority. This made an impression not only on ordinary people, but     experienced rulers. So, Khan of Shirvan Mustafa Yermolov struck by the fact that he came to him with a retinue of only five Cossacks. “That's what I stabbed him with!” — the general spoke afterwards. 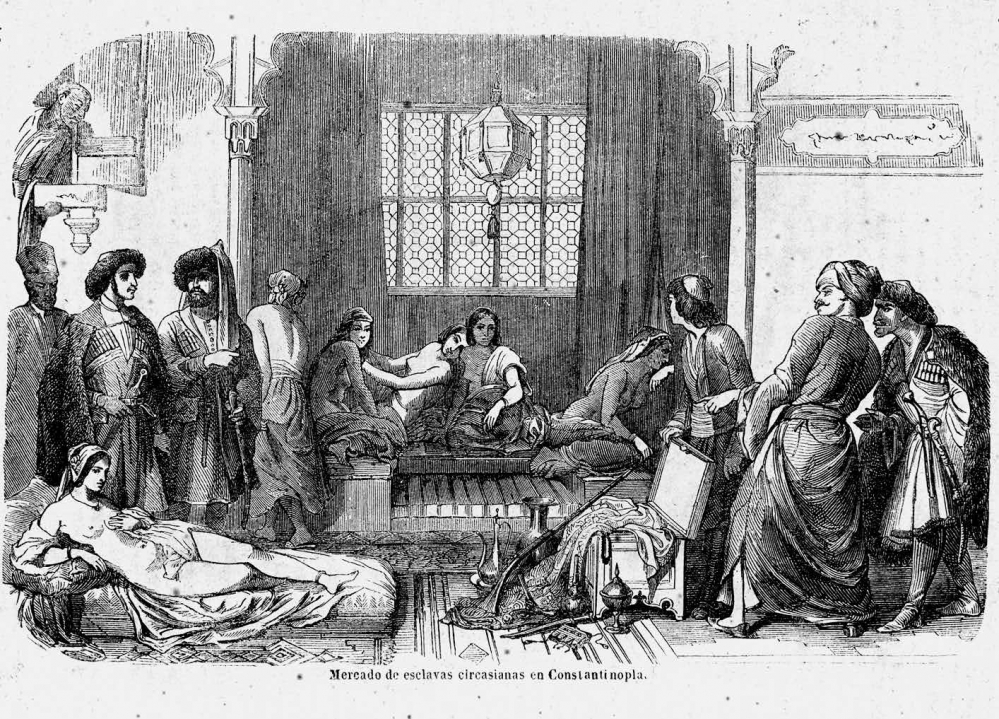 Circassian Slave Market. Engraving of the first half of the 19th century. Photo: Commons.wikimedia.org

Until the world breaks down

Ermolov conducted purely military operations in the Caucasus solely out of necessity. And it was dictated from outside. England and France sought to keep the Caucasus in a state of war, to make it a hotbed of concern for Russia. European weapons and  military experts flowed to "non-peaceful highlanders" through Turkey by the river. Russia was also interested in reverse — bring peace to the Caucasus. There were all the prerequisites for this, including economic ones. Archaeological data show that this region was integrated into the system of the all-Russian market twenty years before Yermolov's arrival: “An impressive picture of the complete predominance of Russian monetary units in the numismatic panorama of the North Caucasus at the turn of the 18th and 19th centuries. ". It fell to Yermolov's share to streamline this market. First of all — exclude from hunting people and the slave trade. And and then set up normal trade and "raise" crafts: “We must try to bring the Chechens closer together by their frequent treatment of Russians. I will prescribe to the chief of troops on the Line about the establishment of trading in the Fortress of Grozny. This order will certainly attract the Chechens, whose products needed by our Linear Cossacks will be exchangeable. I will also give an order to build a mosque, where services can be held alternately on trading days by mullahs from villages located along the left bank of the Sunzha…»

Recognition of the peoples of the Caucasus as equal. Development of crafts and trade. Construction of resorts — it was Ermolov in 1823 g. established the Construction Commission at the Caucasian Mineral Waters, through whose work the North Caucasus received the status of a health resort. Respectful attention to the religion of local residents. This is what the “pacification of the Caucasus” was. As for the punitive actions Yermolov was the only Russian for the entire history of the integration of the Caucasus who got into folklore. “Yermolov, didn’t you feel sorry for ruining our Darga, seeing the tears and cries and sobs of our poor wives and children? You inflicted such great fear on our people as the Shah of Persia… But you rewarded the poor with money, and you feed the hungry with bread, and the people remember the glory of Yermolov among us until until the world collapses» ;. This is what the Dagestan legend says about the Russian general. Is anything worth adding to this?