Another Soviet monument, a T-34 tank, installed at the entrance to the city, has been dismantled in Estonian Narva. According to the authorities, the tank will be transferred to the Estonian War Museum in the village of Viimsi. The dismantling was carried out contrary to the opinion of the residents of Narva, more than 90% of whom are Russian speakers. Local activists were on duty near the tank and organized a collection of signatures in his defense. Did not help. The mayor of Narva, Katri Raik, refused to run for the Estonian parliament and called what was happening a “shock”. 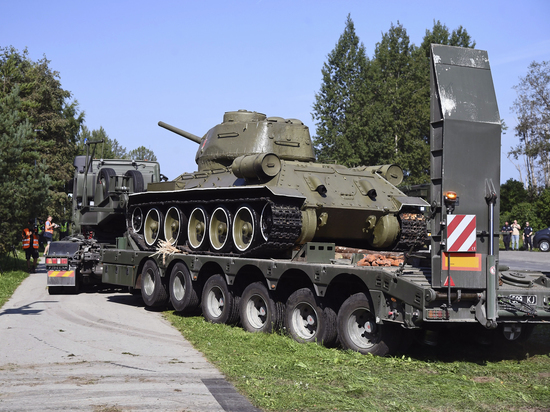 The dismantling of the monument began around 8.15 am. Before that, the police turned off the webcam installed near him, from which the broadcast was continuously conducted, and blocked the roads. There were no activists near the monument at that moment. It was reported that they were dispersed early in the morning by armed special forces who arrived at the monument.

The dismantling was carried out using the equipment of the Estonian Defense Forces. Narva Mayor Katri Raik told local media in an interview that due to road closures this morning, she barely managed to get into her office, which is located on Petrovskaya Square, the main square of the city where the authorities are located. At the same time, Estonia closed the border with Russia at the Narva-Ivangorod checkpoint.

The decision to dismantle the Narva tank was finally made early this morning at an emergency meeting of the Estonian government. Prime Minister Kaja Kallas argued the need to move the monument by saying that Soviet monuments allegedly “serve Russian propaganda”, the purpose of which is to divide Estonian society.

It is interesting that this time the decision of the Estonian government has divided it even with quite loyal to him by the city authorities of Narva, who pointed out that this issue was within the competence of the local authorities and opposed Tallinn's interference in it. On August 15 of this year, the fate of the Soviet tank was to be decided by the city meeting of Narva, but the issue was removed from the agenda.

This morning, during an emergency press conference, Estonian Foreign Minister Urmas Reinsalu made a scandalous statement that provoked a sharp reaction from the Russian authorities. Reinsalu urged “refrain from provocations”, recalling that Estonia has a law on aliens, according to which a person who poses a threat to security can be deprived of a residence permit. “Citizens of a foreign state who systematically violate public order or pose a threat to security, including in the context of current events, must take this into account,” the minister explained. The official representative of the Russian Foreign Ministry, Maria Zakharova, wrote in her Telegram channel that these words are a “direct threat” from the authorities against the opponents of the demolition of the monument.

Recall that Narva is the third most populous city in Estonia, 87% of the population of which are Russians. Most of its history (almost 200 years) Narva was part of the St. Petersburg province. In 1919, the city was captured by Estonian troops. In the early 90s, there was an attempt to proclaim the Narva Republic.

By the way, there is still no legal border between the Russian Federation and Estonia. For one simple reason: Estonian nationalists still have… territorial claims against Russia.

Russians are the largest national minority in the country. However, only about 54% of them have Estonian citizenship. About 21% are stateless. 24% – citizens of the Russian Federation.

In the USSR, of course, peace and friendship reigned among the peoples. But jokes about representatives of different nationalities were still very popular. They were not evil, but looked like a friendly “joke”. In these jokes, Estonians were usually portrayed as slow-moving slow-witted people.

Indeed: an ancient tank from the Second World War stood for itself, did not threaten anyone, did not touch anyone. Did anyone bother that people wore flowers to him? But they did not go to the rallies. Few people outside Narva knew about him at all. And suddenly – noise, uproar, the army, the police, threats of deportation, statements by the Russian Foreign Ministry. It turns out that not the monument itself, but its demolition provokes destabilization and a split in society. Why are the Estonian authorities playing with fire?

There are two options. First: Soviet jokes very accurately reflected reality. The second is that the Estonian authorities are fulfilling the order of their true masters, who really need now, if not the opening of a second front, then at least the creation of a new hotbed of tension, which at least slightly distracts from what is happening in Ukraine. Choose which one you like.