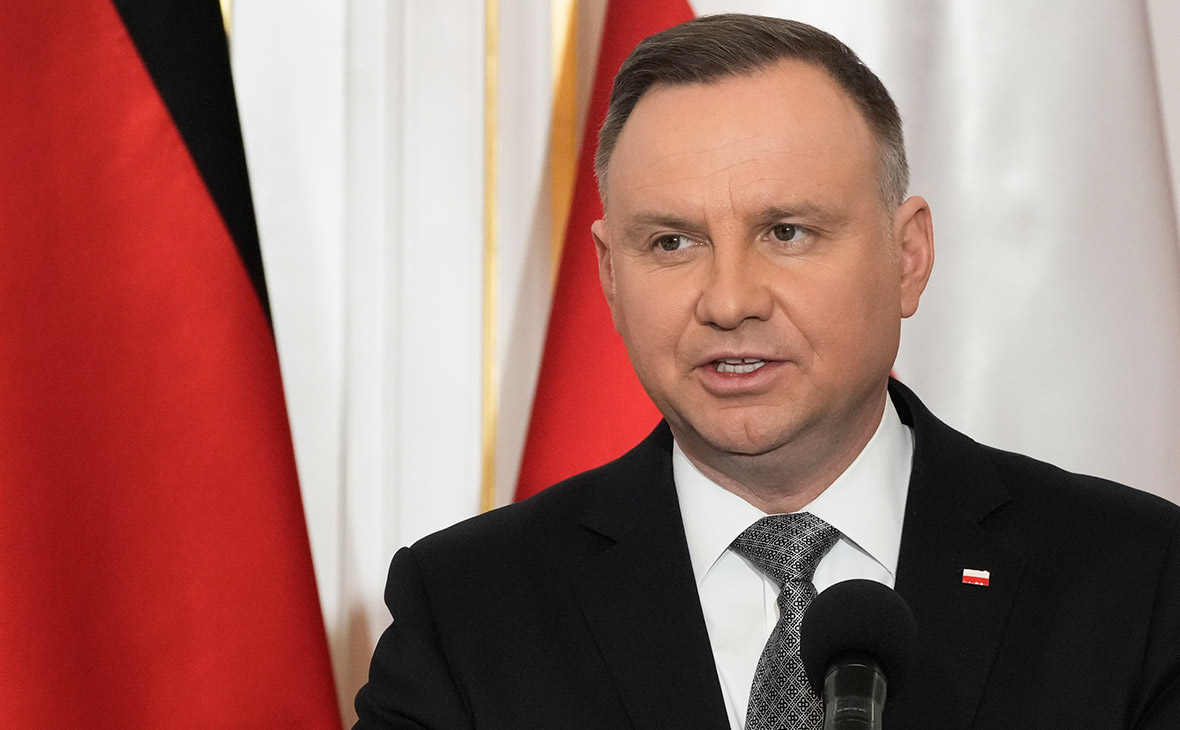 “Most of our tank arsenal in the Polish armed forces consists of German tanks of the Leopard type. Therefore, if Germany supported us, if we received a replacement in the form of a circular exchange, then we would be very happy, — said the President of Poland, adding that “they did not keep that promise.”

Warsaw sent Kyiv a “large amount” of tanks because the Polish authorities are sure that this is their responsibility to Ukraine as a neighbor, Duda added. Poland hoped for support from NATO, the US and Germany, the president continued, explaining that such actions weaken the country's own defense potential. He noted that the German authorities are not helping Ukraine enough.

“First of all, it is Germany itself that should help Ukraine. Ukraine is really in dire need of this help,»,— emphasized Duda.

The circular exchange involves the provision of Soviet or Russian-made tanks by EU or NATO countries to Ukraine, since the Ukrainian military does not need to be trained to use them. Germany undertakes to provide a replacement for the donated equipment

After criticizing the Polish president, German Foreign Minister Annalena Berbock assured that Berlin was unable to transfer heavy military equipment to Ukraine “at the touch of a button or at the snap of a finger,” let alone— not from German stocks. The equipment must be “available, repaired and ordered accordingly,” she explained at a meeting with her Polish colleague Zbigniew Rau.

Read on RBC Pro Pro You want to start production: what benefits you can count Articles Pro Be like us: why Coca-Cola changed its name in China to Ke Kou Ke Le Articles Pro Gas supplies to the EU are falling. What will happen to the shares of “Gazprom” Forecasts Pro Why freelancers still will not replace the company's key employees Instructions Pro What to do with ETF: analysts' opinions Articles Pro Alibaba is trading at a record low price. Is it worth buying Pro Articles BPIFs on foreign securities returned to the Moscow Exchange. What to do as an investor“Therefore, it is important that we are in constant contact with each other so that there are no misunderstandings,” — Burbock stressed, assuring that Berlin is aware of Kyiv's need for “massive military support” and Germany is “involved and involved” in in the process of transferring military equipment”, work is now underway to supply the Armed Forces of Ukraine with a large number of weapons, ammunition and heavy equipment.

Burbock emphasized: “We are strengthening the eastern flank of NATO with German soldiers and equipment in the Baltic countries, as well as anti-aircraft missiles in Slovakia”, reports n-tv channel.

The Polish minister later said that he “took note” of explanations of Burbock, who gave him “a number of reasons”; of the non-circular exchange of equipment and noted that the German authorities clearly want to solve the current problem.

At the beginning of the week, the problems in the supply of German tanks to Poland were reported by the newspaper Der Spiegel, citing sources . The interlocutors of the publication said that Poland delivered 240 Russian-made tanks to Ukraine.

Berlin concluded a similar agreement on the circular exchange of military equipment with Prague, it was about the supply of 15 old-style Leopard 2 A4 tanks to the Czech Republic, in the summer the parties agreed to discuss the transfer of more modern Leopard 2 A7 + tanks, German Defense Minister Christine Lambrecht said, Zeit reported.

Der Spiegel's interlocutors in Polish military circles indicated that Warsaw did not want to receive old-style tanks in exchange and intended to upgrade its arsenal with modern Leopard tanks, which would not jeopardize the country's defense.

At the end of April, the Bundestag, the lower house of the German parliament, approved a document calling on the country's government to supply heavy weapons to Ukraine. 586 deputies supported the initiative, 100 refused to do so, seven more people abstained. The document speaks of the need to “continue and, if possible, accelerate the supply of necessary equipment to Ukraine, including the supply of heavy weapons and complex systems, and expand the sphere of circular exchange.”

Ukrainian In early May, the ambassador to Germany, Andriy Melnyk, announced the lack of support for Kyiv from official Berlin, calling its policy “sluggish”. Chancellor Olaf Scholz prefers to continue the policy of his predecessor, Angela Merkel, says the diplomat: “wait and see, and then make a decision— or not.