Inflation, Coronavirus and Ukraine: even the US is in danger of instability

The President of Sri Lanka, who fled first to the Maldives and from there to Singapore, announced his resignation. The rebellion that overthrew him in the island state was the result of a deep economic crisis. But there is reason to believe that this is only the first sign: protests are becoming more frequent around the world against the background of the most acute problems caused by rapid inflation, coronavirus and the conflict in Ukraine. Not only the developing countries of the “Third World”, but also the developed economies of Europe and even the USA, which are considered stable, were not insured against the crisis phenomena. 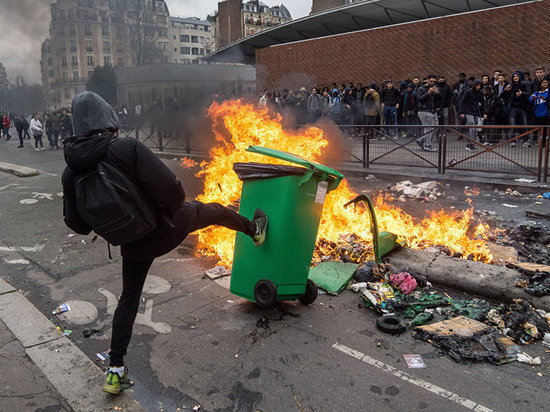 In Sri Lanka, protesters, dissatisfied with the acute shortage of food, fuel and medicine, took over the presidential palace, making it something in between tourist attraction and amusement park.

After overseas-traveled President Gotabaya Rajapaksa finally sent the resignation email that demonstrators had been pushing for months, protesters retreated from government buildings, restoring a fragile calm in the economically crippled country. However, the respite will obviously not be long. With the departure from power and the flight abroad of the head of state, the problems have not gone away. In addition, Rajapaksa further angered the people by appointing his prime minister as acting president.

As the Associated Press notes, the country remains a powder keg, and the military warned on Thursday that it has the authority to respond in the event of chaos. Soldiers in green uniforms and camouflage vests arrived in armored vehicles to reinforce barricades around the parliament, while protesters vowed to continue holding rallies outside the president's office until a new government is formed.

The lack of basic necessities has sown despair among the 22 million people of Sri Lanka. The rapid decline in the island nation was all the more shocking given that the Sri Lankan economy was growing until the recent crisis. In Sri Lanka, inflation reached 54.6% in June, while the central bank raised interest rates to 15.5%. This means that workers are losing savings by the second, while debt payments have increased, putting pressure on household budgets. The government was unable to repay its external debt, and the IMF demanded that it raise taxes and fight corruption as a condition for obtaining a loan to rescue the national economy.

Many observers predict with concern : Sri Lanka with its rebellion is only the first domino to fall, which will entail socio-economic and political turbulence in different parts of the world. In many countries, high inflation has driven up the cost of living and protests are flaring up at a rapid pace.

“I am deeply concerned about the situation of developing countries,” World Bank President David Malpass said back in April. “They are facing sudden increases in energy, fertilizer and food prices, as well as the possibility of higher interest rates. Each of these factors hits them hard.”

The UN trade and development arm, UNCTAD, said in a report that 107 countries faced at least one of three shocks: rising food prices, rising energy prices or tightening financial conditions. All three shocks were experienced by 69 countries: 25 in Africa, 25 in Asia and the Pacific, and 19 in Latin America and the Pacific.

Developing countries are particularly concerned about the global food price shock as they often have limited ability to replace imported food with alternative sources.

Reduced food availability carries an increased risk of civil unrest. According to Allianz Research, there are now 11 major emerging markets that will face a high risk of food unrest in the next few years: Sri Lanka, Algeria, Bosnia and Herzegovina, Egypt, Jordan, Lebanon, Nigeria, Pakistan, Philippines, Tunisia and Turkey.

There are also countries at moderate risk of food disturbances. Colombia, Mexico, Peru, Kenya, Morocco and South Africa have received a significant or large share of wheat imports from Russia and Ukraine in the past few years and may find it difficult to replace wheat imports with appropriate substitutes. Therefore, this situation could lead to shortages of staples such as bread for the next year or so.

However, life seems to be ahead of forecasts. As the cost of basic foodstuffs in Kenya skyrocketed, hundreds of demonstrators marched through the capital, Nairobi, urging the government to lower food prices. The protesters argued that the high cost of living was caused by government over-borrowing and rampant corruption. These are not riots yet, but the ground for them is already there. And this applies not only to Africa.

And indeed, protests are unfolding in many countries (and not only developing countries), including the Netherlands, Argentina, Sri Lanka and Albania .

“The resignation of the economy minister showed that there is an economic and financial collapse that is affecting the lives of workers and the entire population,” Marcelo Ramal, a member of the Labor Party from Argentina, where inflation currently exceeds 60%, told Reuters. “We have to take into account that this year we will have 80% to 90% inflation, and wages will not grow so fast.”

Gloomy economic conditions brewing in the third most populous South American country prompted angry residents to march to the gates of Argentine President Alberto Fernandez's palace, prompting the leader to declare that “we must walk the path to financial balance and currency stabilization.”

On July 1, protests against the government began in Panama – there, a disgruntled public demands that the government solve the problem of the high cost of living in the country. The demonstrators are in favor of higher wages, lower commodity prices and the elimination of bottlenecks in the supply chain. While inflation remains low in a highly monetized country, problems with the global supply chain have impacted Panama Canal revenues, reducing revenues.

And across the Atlantic, in the Netherlands, Fox News reports, farmers are wreaking havoc after forming their own version of Canada's “Freedom Convoy” by blocking highways with tractors, setting fire to hay bales and taking other actions to protest the government's recent emissions reduction target. , which may cause some farms to close.

The Dutch government aims to reduce nitrogen and ammonia emissions by 50% by 2030 to improve air, land and water quality. Government plans include reducing fertilizer use on farms and reducing livestock numbers by around 30%.

The road to hell is paved with good intentions, and Dutch farmers fear the change will harm their livelihoods. Wearing the toga, they climbed into their tractors and trucks to block off supermarket distribution centers, which briefly led to some fresh food shortages on Dutch grocery shelves.

Farmers also clashed with police near the home of the minister in charge of government nitrogen policy. An officer opened fire on a tractor driven by a 16-year-old.

On the other side of Europe, in Albania, thousands of opposition supporters held a peaceful protest in Tirana the other day, calling on the centre-left government to resign due to a cost crisis life and alleged corruption.

Albania saw increases in the prices of basic food and fuel related to the conflict in Ukraine and the prolonged impact of the coronavirus pandemic. At the same time, according to Forbes, the country's central bank announced an increase in interest rates by 1.25%, while the official June inflation was 6.7%.

Even China did not stand aside from the protest activity. According to the US Fox News channel, the police “beat up” citizens who had gathered on the street to protest the freezing of their bank accounts due to the covid restrictions policy.

The protests were targeted at three banks serving predominantly rural communities that had frozen millions of dollars in accounts since April. Some 1,000 protesters gathered to call for the release of their funds outside the Central Bank of China's Zhengzhou branch, but they said they were met with violence.

If in case In China, we are talking about specific problems with specific banks, then discontent in Western countries develops along a different trajectory.

Witse Sonnema of the Netherlands Agricultural and Horticultural Organization says in a commentary to Sky News Australia that the government's initiatives to drastically reduce nitrogen and ammonia emissions have sparked widespread feelings of “frustration, anger and even despair” among the country's farmers, as it could lead to the closure of many farms: “And imagine if you are a fifth-generation farmer, living on your own land, making a living, being part of the local community, and you see a map that says that in principle there is no future. There is no future for agriculture, but there is also no future for the economic, social and cultural fabric of the countryside.”

“Protest against draconian regulations that destroy agriculture and the energy sector in the name of extremist climate policy, says Fox News Digital Victoria Coates, former deputy national security adviser in the Trump administration. “Now we hear that Colombia and even Canada may follow suit.”

“If the Biden administration continues with its current policies,” she added, “I worry that America will not be far behind.”

As Forbes notes, while the US looks fairly strong and employment data points to a booming economy, higher inflation could easily put pressure on US household budgets and lead to protests. The Federal Reserve (Fed) is “walking a tightrope and any mistake or black swan event could easily trigger demonstrations.”