Employees of the Russian Investigative Committee completed the investigation of a double murder, which, according to them, was committed by a member of the terrorist organization “Network” * together with a friend . One is now behind bars, the other is on the run. The remaining members of the underground community have already been convicted under other articles.

Body in the forest

In April 2017, 19-year-old Ekaterina Levchenko and 21-year-old Artem Dorofeev disappeared in Penza. The young man's relatives were the first to call the police. Photos were posted throughout the city and in local publics. Both operatives and volunteers searched.

Every now and then there was information that a similar couple was seen in different areas. Friends suggested that Artyom and Katya could move. Why without warning is a mystery. 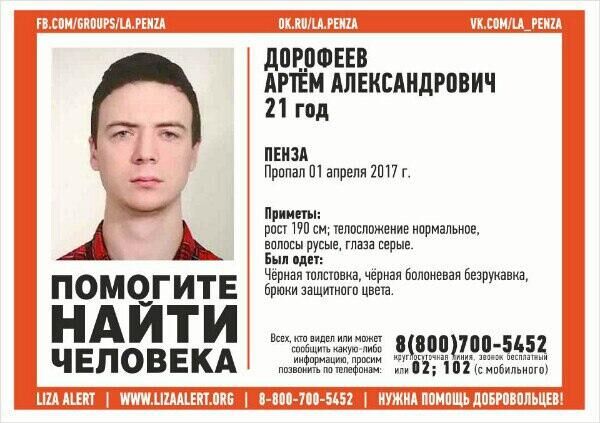 A few months later, in November, near the village of Lopukhi, Ryazan region, mushroom pickers found a male body with gunshot and stab wounds. The deceased appeared to be 25-30 years old, there were no documents. For two years the body was listed as unidentified. Only in the fall of 2019, with the help of a DNA test, did experts establish that this was the missing Dorofeev. At the same time, a criminal case was opened under the article “Murder”.

In 2020, the buried body of a girl was also found nearby. By that time, the name of one of the suspects was already known. True, in a completely different matter. alt=”The Case of the Network*. Who is accused of one of the most notorious murders” />

In October 2017, employees of the Penza traffic police stopped the car of a 20-year-old student of the local pedagogical university Yegor Zorin. Drugs in pockets and cabin. And quite a lot.

The young man willingly cooperated with the investigation and, in order to speed up the term, he reported on a terrorist community that had been operating for two years. The materials were immediately handed over to the FSB.

According to Zorin, in the spring of 2015, 27-year-old shooting instructor Dmitry Pchelintsev and 23-year-old physics student Ilya Shakursky united several acquaintances around them who were fond of airsoft, adhered to anti-fascist and anarchist views. The first cell was called “5.11” (the date of execution of the Penza revolutionary Nikolai Pchelintsev, who was hanged in 1907). It included five people, including 25-year-old former sailor Maxim Ivankin. 153:954:523_1920x0_80_0_0_85187bc3d97e8ee2e372bbbe5b782306.jpg” alt=”The Network case*. Who is accused of one of the most notorious murders” />