Are most white Americans guilty of 'supremacy' or just 'privilege'? 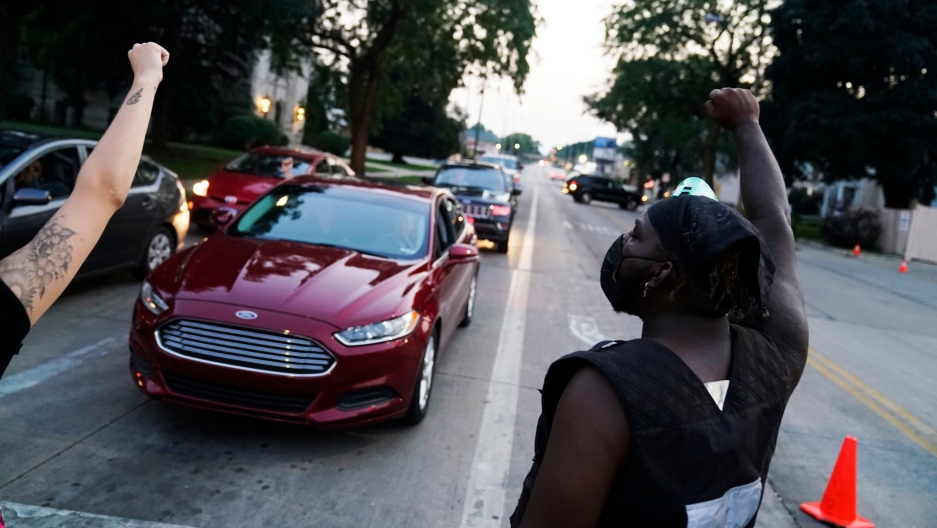 Protesters block an intersection while demonstrating against the Sunday police shooting of Jacob Blake in Kenosha, Wisconsin, Aug. 26, 2020.

On Sunday, a police officer in Kenosha, Wisconsin, fired his gun at Jacob Blake from close range. The unarmed Black man was shot seven times and is now partially paralyzed.

Protesters are vowing that they will not stop marching until the officer, Rusten Sheskey, is brought to justice.

Related: How systemic racism intersects with the coronavirus pandemic

The history of white supremacy is complex and the meaning of that term is often disputed. For more on that topic, The World’s host Carol Hills spoke with Peniel Joseph, the founder of the Center for the Study of Race and Democracy at the University of Texas at Austin.

Carol Hills: The tone of the news coverage of these events outside the US seems to be, “this happened again.” If you were to explain these events to people abroad, how would you contextualize them?

Peniel Joseph: We have a long history of this. In a lot of ways this is very similar to both before the Civil War and right after the Civil War. And certainly, we had no social media or coverage, but there’s going to be a lot of skirmishes. There’s going to be a lot of anti-Black racial violence. At times, white allies are being killed as well. And really, this was a struggle over political power and the very meaning of citizenship. So, you saw a series of racial pogroms and massacres against Black citizens in the United States. And there were constant images and stories and narratives of Black people being killed who tried to vote, who tried to politically organize, who had prosperous communities or towns. And after a while, the North got sick of it. And really, with the withdrawal of federal troops in 1876, white supremacy was restored in the South. And so, when we think about now, with all these national protests, really the main arm of white supremacy in the United States right now is law enforcement.

Do you see a direct, exclusive connection between police and white supremacy?

Oh, yeah, absolutely. But I think it goes beyond police. When we think about the police, the police are part of a system that racially and economically oppresses Black and brown people in the United States. That being said, they’re just part of that system. So, even the move to reimagine public safety is saying, “You need to invest less in police as the first line of public safety and more in terms of mental health, desegregation, public schools, employment” — all these different things that create safe communities and safe neighborhoods.

Now, I want to talk about the term “white supremacy.” We hear it a lot these days, used in all sorts of different contexts, everything from corporations that are heavily white in leadership to police shootings of Black men. But the term also has historically been used for things like the KKK and slavery. What do you think of how the term is being used today?

Well, I think it’s being used expansively and it should be. So, white supremacy goes beyond racial slavery, even though racial slavery gives birth to white supremacy. It’s a political ideology that’s connected to structures and institutions that designates people who are considered “white” as being superordinate or having certain special privileges and powers within that society, within that nation-state. So, even if you are poor and white in that nation-state, you’re going to have better life chances than somebody who’s Black, and at times might even be college-educated.

You’re treated better by the criminal justice system. You’re going to have better health outcomes. If you are an opioid addict, you’re going to be treated by doctors, as opposed to being a crack cocaine addict and be thrown in prison or killed by the police. So, when we think about white supremacy now, I think it’s a great and progressive thing that we’re not just thinking about the Klan — because most people are not part of the Klan. And when we think about white supremacy, whether it’s against racial integration of the 1950s, it wasn’t the Klan that led that fight. It was ordinary citizens, ordinary Americans. Sometimes, they were part of groups called the White Citizens’ Councils, which included preachers and clergy folks and business leaders, people on PTA and boards. And these were the white supremacists.

These days, “white supremacy” is being used to describe people who in some cases, or many cases, don’t see themselves as being “white supremacists.” Do you think certainly by association, that somebody is part of some larger structure that whites predominate in, that it’s fair to call them “white supremacists”?

Well, I think there’s a difference between white supremacy and white privilege in people who might be getting privilege from just their whiteness because of the racial caste system that has been set up in the United States through racial slavery, mass incarceration and institutionalized structural discrimination. Whether or not you’re going to say they’re active white supremacists, you can get into a discussion and debate over that. Can you say that the United States is a white supremacist nation? Yes, it is. Are you going to say every single white American is an active white supremacist? No, they’re part of a larger structure. So, you can tease that out, of course.

This interview has been lightly edited and condensed for clarity.