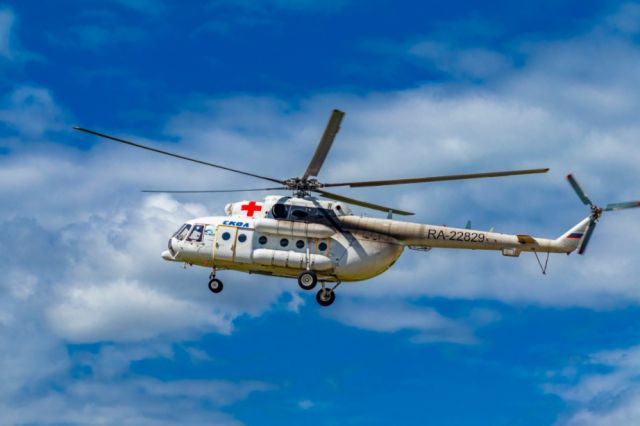 In other words, over 9 months, 117.6% of the plan for 2021 was implemented. In the regions, within the framework of the Healthcare National Project , medical aviation is developing, making medical care in remote parts of our country more accessible.

In the Volgograd Region the air ambulance brigade made 280 sorties. In most cases, residents with cardiovascular diseases required help. Winged Ambulance helped 141 people with acute coronary syndromes, 18 & ndash; & nbsp; with strokes. 20 & ndash; after an accident, 14 & ndash; with domestic injuries, 13 & ndash; with poisoning. In addition, patients with exacerbation of chronic diseases and those in need were transported by air. in urgent assistance of specialists from leading medical centers in the region. Among the rescued & ndash; 44 children, including three under one year old, five pregnant women

Air ambulance started its work in Yaroslavl region … The first patient was delivered by an ambulance helicopter from Uglich to Yaroslavl. The resulting injury caused a complication, so an urgent operation was required with the participation of specialists from the Solovyov Hospital. The use of ambulance transport for the transportation of patients will become a qualitatively new step for the Yaroslavl health care system towards increasing the level of medical care. By helicopter, doctors can quickly get to the patient in such critical situations as road accidents and other emergencies. Also, with the help of ambulance transport, patients can be delivered from distant areas to the central clinics of the region. There are two helipads in Yaroslavl. The main & ndash; on the territory of the regional hospital, reserve & ndash; & nbsp; at hospital No. 3. By the end of the year, more than 30 air transport departures are planned.

Since the beginning of 2021, medical aviation Krasnodar Territory made 200 emergency flights. Patients in serious condition are also transported by ground resuscitation teams, which have carried out more than 1.8 thousand visits. & Nbsp; The department is based in the first regional clinical hospital (KKB No. 1). The park has 18 reanimation vehicles equipped with advanced equipment. It allows you to carry out all the necessary manipulations on the road to save life. They also use a certified helicopter to assist patients and transport doctors for emergency operations. Doctors of 18 specialties are on duty around the clock. Among them are surgeons, anesthesiologists, neurosurgeons and traumatologists. Since the beginning of 2021, the resuscitation teams have transported 903 people for treatment to KKB No. 1, of which 196 patients & ndash; helicopter. & nbsp; In some cases, regional specialists help their colleagues in the municipalities with recommendations. For this, a multichannel communication and dispatch service works. Doctors conduct over 100 audio and telemedicine consultations daily.

The new helicopter of the Perm Territory air ambulance made 58 flights in 3.5 months of 2021, evacuating 84 patients, 6 of whom are children. From the moment the helicopter is called to a remote area until the patient is hospitalized, no more than 4 hours pass. The new helicopter allows several patients and accompanying doctors to be transported in the cabin at once. In October, the medics of the air ambulance evacuated residents of Chernushka, Chusovoy, Tchaikovsky and other cities of the Perm Territory, mainly with vascular accidents & ndash; with heart attacks, strokes, aortic aneurysm. Patients are hospitalized at the Federal Center for Cardiovascular Surgery named after & nbsp; S. G. Sukhanova and regional clinics.

Development of air ambulance & ndash; one of the important directions of the federal project “ Development of primary health care '', which is being implemented within the framework of the national project “ Healthcare ''. Its goal is to provide high-quality, timely and equitable medical care to all residents of the country.